A couple of blogs ago, I mentioned Wonky Wing, a blighted juvenile Blackbird that has taken up residence in the our garden.  It doesn't have too much going for it, as it hops around mostly on one leg as one of them appears not to be able to take much weight on it.  It's right wing is set off out to one side at an angle, which may be because of an expanding growth below the wing, that is bald of feathers.
As if that wasn't enough it also has a cough, or what seems like a cough ever few seconds.
However, it is eating well as we put down plenty of food, and it can fly of sorts. But it does seem so vulnerable that I wonder how long it will survive.  It has been around for about three weeks now.
Here is an image of it taken last night. 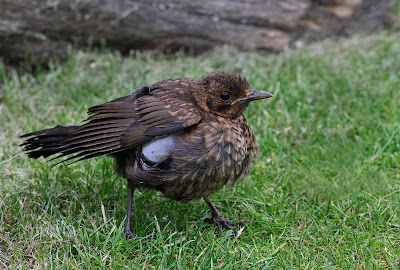 Poor scruffy little thing!!
It is not phased by me and is quite happy to be very close, an came about two feet away from me while I was photographing a Southern Hawker dragonfly last night.
I will keep my fingers crossed for it, and keep feeding it while it remains alive.
Martin
Posted by WPATW at 05:00