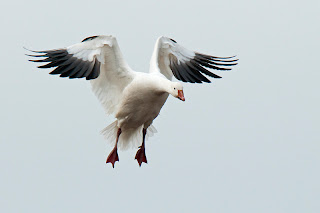 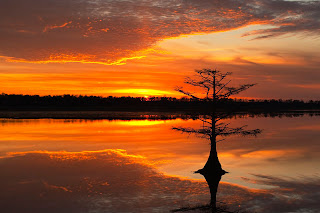 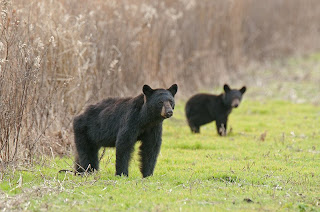 She looks very lean and the cub has certainly taken it out of her, Looking at the 'poo' on the road they are eating some left over corn and berries, I will be returning soon as I have now found 3 areas where the bears hang out regularly, The migratory birds will be here until the end of Feb and after that I will be trying for the Grey fox and possum that i see at night around my garden
Dave
Posted by WPATW at 15:20 2 comments:

News - No owls to be seen 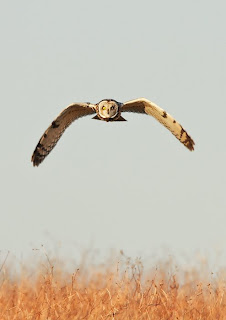 I went out to day to a site where Short Eared Owls are being seen at the moment. Sadly not today though. It was cold grey and windy and the light would have been awful. Did get to see plenty of Fieldfare, some Corn Buntings, which are becoming increasingly rare and a few Redpoll on the tree tops. Also bumped into another well known wildlife photographer from these parts, Mike Lane, who was also after the same photo opportunities as me. It was nice to have a chat - small world!!

The image of a Short Eared Owl is one that I took back in February this year at a different site
Martin
Posted by WPATW at 16:51 No comments:

From the Archives - Starlings at Twilight 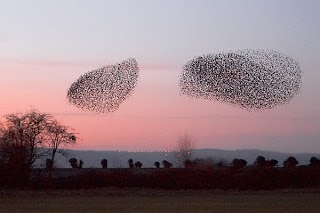 Here is a sight that is truly spectacular. Taken a couple of years ago from the car park at WWT Slimbridge in Gloucestershire, UK. Using my Canon 1Dmk2N at ISO1600, my 70-200 f2.8 IS L wide open at f 2.8 I managed to capture the split flock. I needed to use noise reduction software to keep the noise out of the sky, but given that it was almost dark it shows what can be achieved with older generation kit.
Martin
Posted by WPATW at 21:21 1 comment:

David is a Nikon user since September in 2008 and with many years experience with Canon before that and Martin has been using Canon gear for many years. What you will see on here is our experiences with our cameras and the systems behind them - a celebration of Nikon and Canon - NOT Nikon v Canon as I am sure you will have seen in many other places. Although Dave is true to the Nikon stereotype and sports 'facial hair'

We aim to set out news, views, reviews on what we do, how we do it and what we like in wildlife photography and will share some of our favourite images from the various trips we make.
Join us on our journey