With other activities than just frogs in my pond, I will bring the Pond Life series this year with the comings and goings of anything that could be considered 'non-frog'.
With the activity in the garden a couple of weeks or so earlier than last year, I was expecting the first of the Damselflies to emerge over this last week, and I haven't been disappointed.  The first started to emerge on Wednesday and we have seen between five and eight on everyday.  Although on Sunday, there should have been at least one more but one of the frogs grabbed it before it could get up the plant stem to emerge.
I have also seen four empty cases of Broad Bodied Chaser in the water but have not seen any emerge so I am wondering if they have been sucked empty by the frogs look for a succulent meal.
Anyway, I took as series of images on Friday morning that show the damsel as it emerges from the case with a series of its growth as the wings and body expand as it pumps the fluids through its body to become fully formed.  but I will bring you those images later in the week..
On Saturday morning as I was about to start work on the next phase of the pond, I saw a damsel that had just emerged and was beautifully back lit.  It was slightly too far away in the middle of the water to use just the 180 macro with the 5D so I needed to add some focal length.  One of the beauties of the Canon 180 macro is that you can add the 1.4 EFTC  - not something you can do with the other macro lenses  (Note: Not sure if you can with the new 100 so that may not be totally correct)
So with the body/lens set up, all that remained was to get the bean bag supported on the pond edge on a large plank so it could overhang the water and get busy.
Once again, the live view facility came into it's own. 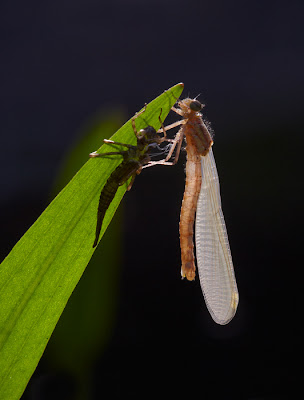 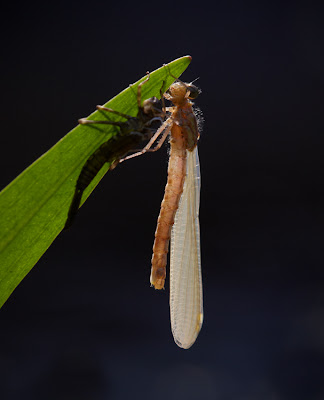 Large Red Damselfly
As you can see it is still forming, and at this stage the wings are fully formed but the body has a long way to pump out to full size.  You will be able to see this better when I bring the full series later in the week.
With the strong back light, the background goes to black, or very nearly anyway.
After a while, the sun popped behind a cloud for a short while, and this is the result. 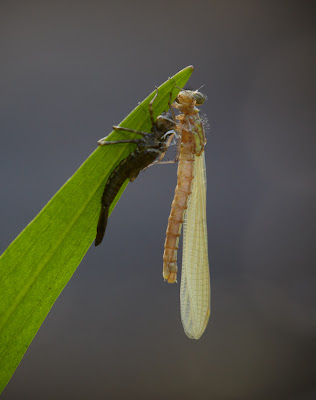 Quite nice, but not in the same league as the back lit version, in my opinion.