Following on from previous parts of this mini trip report, this part is slightly out of sequence chronologically but here it is anyway.
I went to the coast for the sunrise but sadly there was no sun.  The light just went from cold dark blue grey, to cold dark grey to cold lighter grey, so I wont bore you with the horrible flat light images that I took.
After going back to the hotel and a wonderful breakfast, we went across to the Arne, stopping off on the way to see Dartford warbler (briefly) and Stonechat.
The light stayed flat and with a cool easterly breeze, in marked contrast to the hot bright day before, many of the birds were not playing ball.  Walking across to the saltmarsh, the Deer were going to be the best chance, and there were plenty there, along with a few hundred Brent Geese.
The Deer at Arne are one of the few herds of Sika Deer in the UK.  Originally introduced to the UK from its native range in Asia in the latter half of the 19th century, they can be seen in a few locations in the UK.  The Arne is as good as anywhere, and with the heathland or saltmarsh as habitat it makes for some interesting background for them to be photographed in.
Generally a much 'dirtier' brown that the native Roe Deer, they are also display the characteristic white heart shape round the rear end.
So here are a few for you 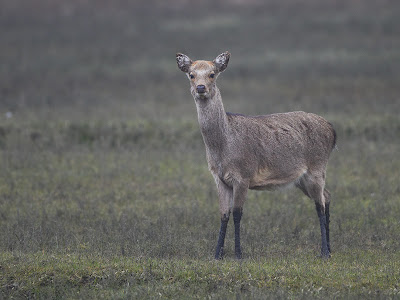 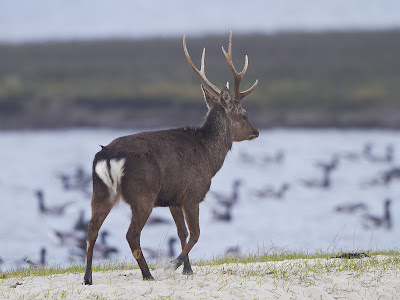 On the beach with Brent Geese in background 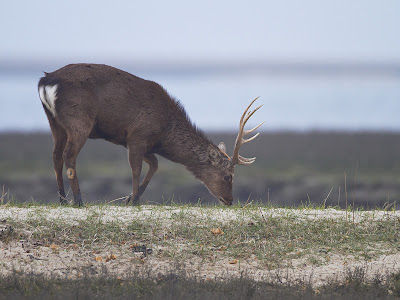 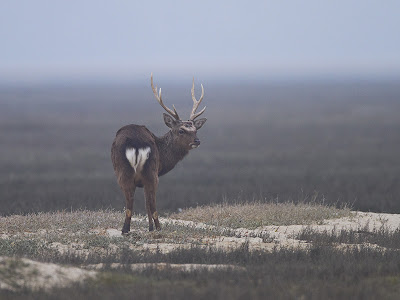 Lonely in the grey 'murk' 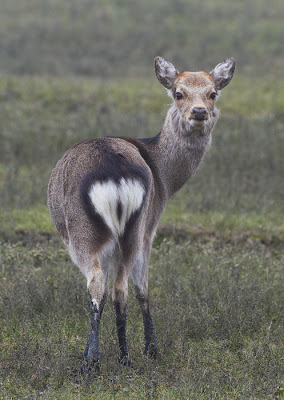