We took a couple of days out to head across to RSPB Minsmere  in Suffolk on Easter Monday and Tuesday to catch up with activities over there and for me to try my hand at some of the species that can be seen there.  I have been going to Minsmere for just under twenty years or so now, but haven't been for three years so I was looking forward to getting back there.  With the Spring seeming to be a bit  'earlier' this year I was hoping that there would be plenty of migrants in, but I think we timed it about two weeks too early.  So maybe we should have stuck with the usual preferred time slot of middle of May.
After a relative heatwave across much of the country for the previous week to ten days, the weather changed and we were greeted by a very cold and strong north east wind coming straight off of a very cold North Sea.  The previous heat wave had lulled me in to a false sense of summer so I was grateful of the hides to stay out of the cold wind.
Minsmere is a great place for wildlife watching and we saw plenty of birds species as well as a good few mammals, insects and butterflies too.
In this mini series I will bring you the main species I was after which were Bittern, Marsh Harrier and what I will call the rest at the end.
Minsmere has done extremely well over the years with an excellent reedbed management programme that has proved very encouraging and there are usally now double figures of booming male Bittern to be heard.  However, they remain elusive to the eye for many people and patience, as ever, is called for.

Many a time I have been into a hide to be told, 'You should have been here five minutes ago - it was right here in front of us'  I also reckion the same is true when you leave a hide if you have not been successful and that the things turn up  just after you leave.

By the time we got to the first hide at Island Mere on Monday, the bright sun was high and in the wrong direction for photography but we held out as Jac had not seen Bittern before, and so it was to remain.  A couple of Snipe immediately in front of the hide followed by a very confident Water Rail in the open but with a steep view from above and harsh light there was little point photographing so it was a case of enjoy the views of te ewildlife.

In and above the reedbeds, Bearded Tit, Reed and Sedge warblers could be seen and heard, and many Marsh Harriers were floating effortlessly searching for food or nesting material.

Sand Martins danced across the water catching their prey too.  But no Bittern.

So to the next day.  Getting out of a bed and venturing into the cold wind on Tuesday morning at 05.30 to be met with grey murky light replacing the crisp blue of the previous day, my bed felt more welcoming but off I went back to the reserve.

Walking through to the Bittern Hide this time, I was met with half a dozen very close Red Deer who weren't phased by me, while on the other side of the track a couple of Muntjac watched me carefully.

There were four others already in the hide and the conditions and light didn't seem good but patience was called for.

About two minutes after getting into the hide and scanning with my binocs, I picked up a pair of Marsh Harriers a good distance away, but just ahead were a pair of Bittern.  Too extreme a range for an image, and to be honest I wasn't ready with the camera at this stage.

As can be the way after such a sighting, it took a quite a while before the next sighting.

As usual we are always optimists and I took some images, in poor light and and extreme distance in case it was the only sighting that I was going to get. 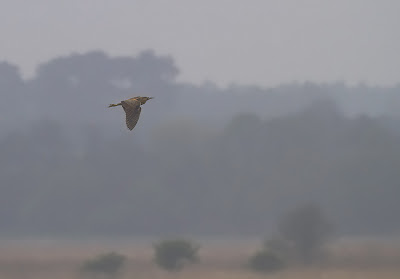 Oh well......at least you can identify it.
Time passed and there was another distant sighting, and my hide buddies had decided they had had enough and ventured further on and were content with the brief sightings plus the Kingfisher and Red Deer we had seen in front of us at this stage.
After about five minutes of them going, and while I was checking out some images with my head down, I caught an incoming largish shape and looked up just to see a Bittern landing right in front of me.  They left too soon.
With no noise and other birds around, the Bittern was bold and made the most of the quiet situation. 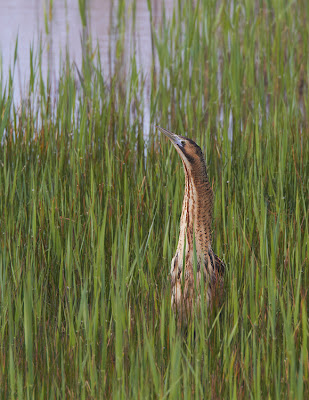 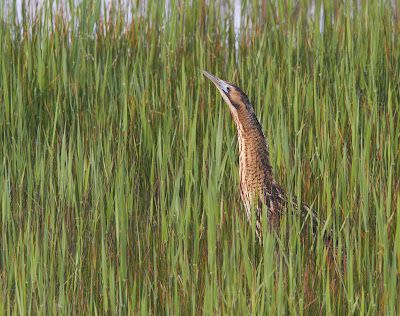 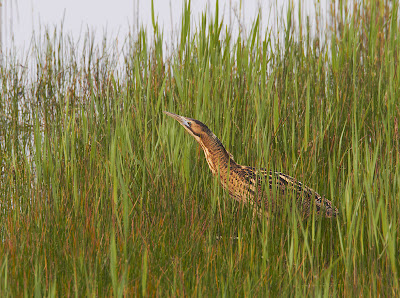 Confident and off for a wander 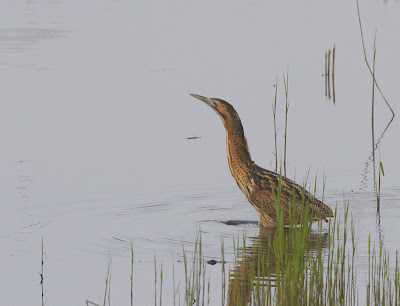 Wading across the gap to the next set of reeds
After it had gone into the reeds, I watched the Marsh Harrier for a while and was fortunately still alert a short while later when the Bittern got up from the reedbed and flew away to my left into the wind and into the light that had come up a little more now and was a bit more sympatheic towards photography. 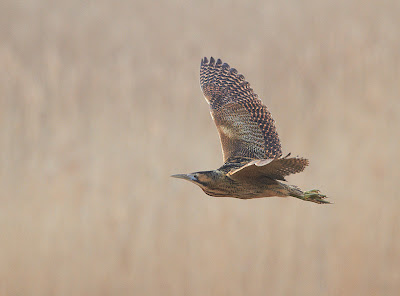 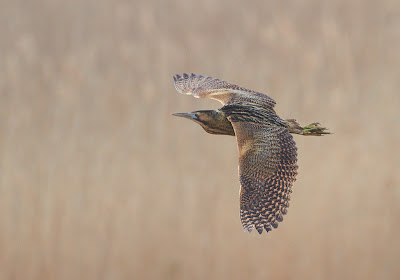 I was happy to see this at quite close range and went back for my breakfast at about 0900 after a very pleasant few hours when the thought of getting out of bed was not appealing.
We came back later in the day and nothing showed in the morning so we came back again later in the afternoon and Jac got her first sights of Bittern including another similar close flyby altough the light was less favourable for images so nothing to show that would add  to what I have already posted up.
Back next time with Marsh Harrier.