A few years ago on my birthday, I took some images from this same viewpoint, or almost from this viewpoint to be strictly accurate.  There is a little notch that has space for one maybe two photographers and it was occupied previously.  This time I got it to myself.  So these images were taken with the camera about 7 or 8 feet lower, and the reason will be clear when I explain.
In a previous post, part 2, I shared the sunrise images that were taken about three hundred yards and twelve hours previously.
On arrival at this spot, I took a quick image without any filters, and have done a straight conversion with the RAW image with changes 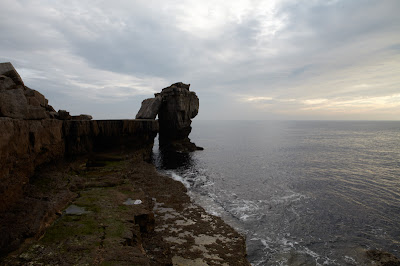 All pretty unappealing I think
Now fitting the lens out with the 10 x screw on ND B & W filter and the Lee Filter 3 stop ND Blending grad, I got this result after a 6 min and 12 second exposure 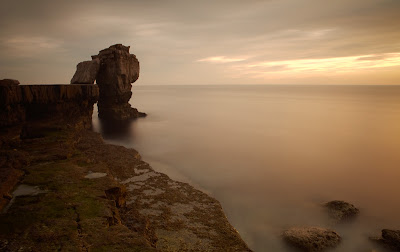 Better, but I dont think it works as well as the morning shots did with the lighthouse at sunrise
Getting rid of the 10 x and waiting for a bit more sunset, things start to look much better 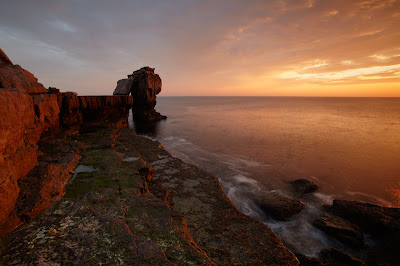 With the sun coming out from under the clouds, the rocks to the left start to get a nice glow
On the filters, I used the Blender, and another 1 stop ND Grad in the second slot, with a soft transition.  I also rotated the filter holder so that the grad line followed the line of rocks from top left to bottom right, as it was the brighter areas I wanted to hold the exposure back on. 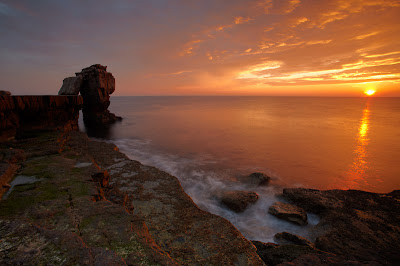 With about a 3 second exposure, a bit of water movement adds to the scene 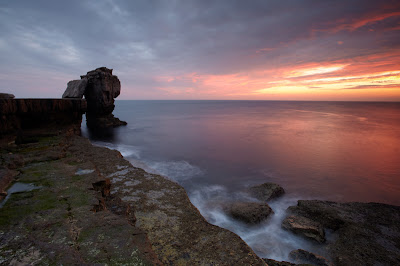 Finally, with the sun dropping below the horizon, the colour temperature comes down and the scene starts to go cooler.
As I mentioned at the start, with a view point about 7 feet higher, the horizon line of the sea comes up above the rocks to the left of Pulpit Rock.  With this view point you lose it.  It pays to watch other photographers and see their attention to detail.
Just a pity the sea was so calm.  I would have like much more action in the water.
My final critique is that I went there too late in the year.  If you go between the months of November and February, I reckon the sun would be in a more advantageous position in the image.
MArtin
Posted by WPATW at 19:15