I mentioned before that my Sigma 180mm macro lens had gone in for an update and that the update is not yet ready, Sigma kindly offered to loan me a 150mm macro until they can update my 180 which could be months, True to their word the 150mm arrived, A couple of days before it arrived we found a largish spider in our house-dead-it was a wolf spider, It had a couple of legs missing which may have been down to the dog but apart from that it was in good condition, I said that it was a shame that i didnt have the macro lens and my wife suggested that i put it in a container and keep it in the freezer until the lens arrived which i did, I made a makeshift studio in my kitchen by putting some white paper on the work surface and curving it up and sticking it to the tiles, I put the Sigma 150 on the D7000 along with a 32mm extension tube for extra magnification, I set the lens to 1:1 and moved the rig forward until it came into focus, I shot at ISO 100 and set the aperture to F11, I tried it with 1 flashgun on a cord at various angles but the shadows just did not look right so i put a flashgun either side of the lens and had a SU800 transmitter on the extension cord so that it could 'see' the flashguns, 1 flashgun had a large diffuser on it and boy did that make a difference, the light was really nice and soft, covering the spider and background, I can tell you one thing-That it one sharp lens, Sigma has discontinued the 180mm macro and has just updated the 150 to include image stabiliser-should be a cracker
I would like to thank Sigma for the loaner and can highly recommend their macro lenses 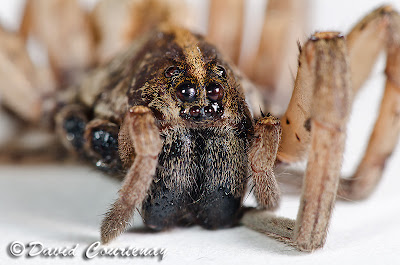 Email ThisBlogThis!Share to TwitterShare to FacebookShare to Pinterest
Labels: sigma.d7000.150mm.180mm