Another orchid species for you

Last year, I bought you this blog , sharing an image of a rather poor little specimen of what I incorrectly identified at the time as a Common Spotted Orchid, Dactylorhiza fuchsii.

Well I had a closer look at it this year, and can confirm that is indeed a Heath Spotted Orchid, Dactylorhiza maculata  as can be identified by the pattern on the petals, and also on the label when I bought it now I have found it again.

To be fair, it was so scruffy last year, that I will forgive myself the poor i/d. And I can console myself that none of our readers told me I had got it wrong :-)


So here it is this year hiding down in among the rest of the wildflowers in the garden.  Just a mere ten steps from my kitchen door.  Like many orchids this year that have suffered with extreme dry conditions the bloom could be bigger, but I am pleased that it has come back again, as I have a bit of soft spot for our native orchids. 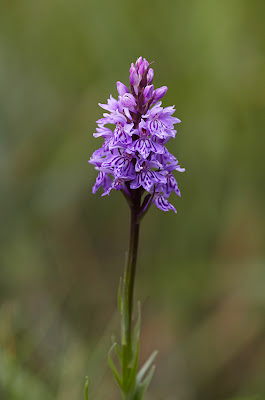