I received the D7000 back from Nikon a couple of days ago, The list that came back with it was strange showing that within the service they replaced the LCD, Its doesnt look like it and i have no reason why they would do that bit still it showed that they upgraded the firmware and that was already done by me-who knows, What i do know is that it is back to full health and they even gave the sensor a clean-well done Nikon
Yesterday i popped the battery back in along with a SD card, attached the battery grip and put the custom functions back as i like them then decided to go and give it a try, The rear dial now works how it should which was the main problem, I put the 600 vr lens on and attached it to the tripod with a SB900 flash on a remote arm and went into the garden and set up by my hummingbird feeder, I set the ISO to 800 so as to get a fast shutter speed, It was mid dayish so the sun was high and it was over 90 degrees, The shutter speed set to 1/2500 along with the flash set at -1.7 i knew that i would not freeze the wings totally but it should be pretty good, It did not take long before one of the 4 hummingbirds that use the feeder came along and had a drink, The females take their time and take multiple drinks whereas the males dash in drink and go in a split second, I was there about an hour and ended up with the 1.4x on to fill the frame, The images came out pretty good and all were sharp 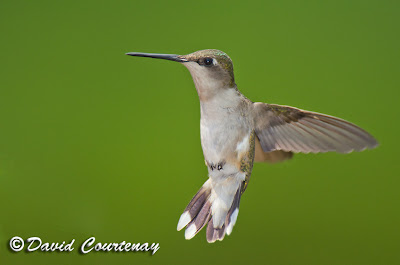 This is full frame and i have cloned the feeder that was just poking in the frame at the bottom left, The background is a distant bush, You can see that the light was harsh but the full flash has softened the shadows, A few hours later and the temperature is now 97 and i am tucked behind a bush near to the pond, I start with the 600 with tubes and then change to the 200-400 with a 1.4x and tubes just to allow for better framing, The other day i wedged a stick up against the pond and instantly the dragonflies started to perch on it, Its become a favorite place for the blue dasher and the common white tail who buzz each other and try to dominate the stick, The background is all important in images like this and i had to jiggle around abit to get the distant trees in the image rather than grass to tall weeds that surround the pond 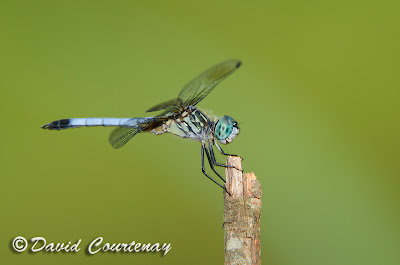 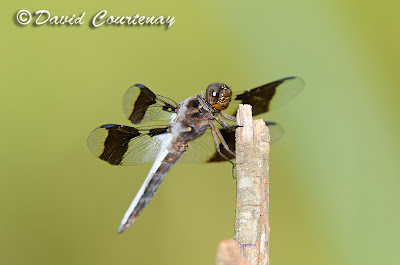 The dragonflies were in shade and the shutter speeds were very low, 1/40 along with the long focal length meant that the images would more than likely be blurred or soft, The fill in flash has helped freeze any movement and i ended up with plenty of keepers
So pretty good test and so far so good, If you read certain forums you would think that the D7000 is a troublesome camera with oil spots on the sensor, front or back focus problems blah blah blah, Lots of people returning their cameras because of a speck of dust on the sensor, Well my experience with the D7000 has been great, OK its just come back for repair but i have probably put more images on it then most people would in years, Remember its not a pro body, The sensor is great, The images above are all at ISO 800 with no noise reduction, Bang for your buck its a bargain