My wife called me last night to say that there was  large spider by the back door, I opened the door and there was a large (read very) dark shape in the corner, It looked huge and an oddish shape, I could not see what it was and as i tried to put a plastic container over it i hit its back and BANG an explosion of hundreds of tiny spiders hit the deck, I grabbed a bottle of insect killer and blasted the little ones, Mum ran out with her front legs held high, I didn't want to hurt the female-well any of them really but as we now have our house on the market i did not feel that buyers would appreciate hundreds of spiders running around, Unfortunately mum went where i had sprayed the kids and would not last long, I managed to get her and a couple of the tiny baby spiders in the plastic container and in the freezer she went, Today i let her thaw out and straightened here legs on my kitchen set up, I managed to get one of the tint babies in the image, They were so small that i could not tell if it was upside down or not until i had taken a shot, The female was the biggest spider that i have seen here, We have an exterminator come to out house and spray chemicals to get rid of all the nasty bugs that live in the area so i am guessing that if i had not managed to kill her she would not have lasted long
So again i used the D7000 with the Sigma 150mm macro and a 32mm tube, Tripod mounted and with 2 flashguns 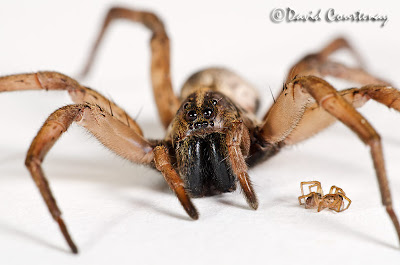 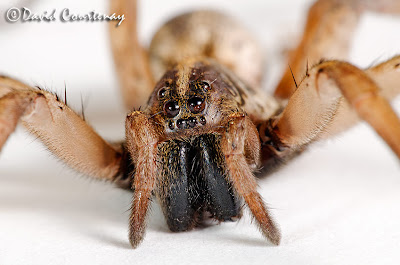