I revised Huntley meadows on Friday as Thursday was a wash out-24 hrs of rain and boy did it show as the water level was much higher, I got there for first light and as i walked out onto the boardwalk flocks of red winged blackbirds flew over head and a few were on top of the reeds calling out 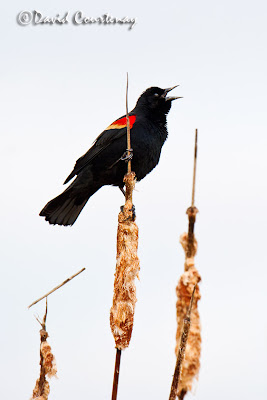 The light was very low and this is quite a big crop, As i took the above image a beaver came out of the reeds and cleverly swam under the boardwalk and straight up to and under the lodge, I got a great view of it buit it was not possible to get any images, I carried on and looked at the herons, teal and geese on the lake, I thought i would go to the same area where i saw the hooded mergansers last time and sure enough they were there, I could see 4 pairs on the lake as well, I got into position and waited for them to get closer and hopefully get some light as it was now overcast whereas they said it would be sunny, After about 15 minutes they flew off and when i turned around there was a bird watcher standing behind me, He was a nice guy and talked for nearly an hour,Not long after he went i was surprised to see another beaver coming my way, I took some shots as it past and then it got out and stood on the beaver dam, I had a tree in the way and by the time i moved the tripod it was back in the water-shame as it had a great reflection I kept an eye on it as it swam down stream towards another lodge, I was shocked to see it get out and have a wash and brush up about 200 yards away-out in the open, I quickly packed up and made my way downstream but by the time i got there it was gone, The ground was very wet and much of the time it was over my Northface trainers-these are great and not only comfortable but waterproof, I went back to where i started and set up but shortly after wards another photographer arrived and came over,after 20 minutes he left and so did i, This is one great place for both photographers and birders, I could image how i would set up if i lived closer and spend some time with those beaver, Its the best place i have been for these,
Here are a few images from the morning, The hoodies are quite big crops and shot at ISO 1600 so not the best but shows how close to being great shots 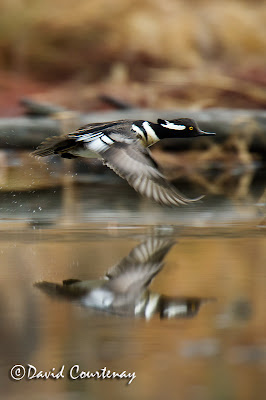 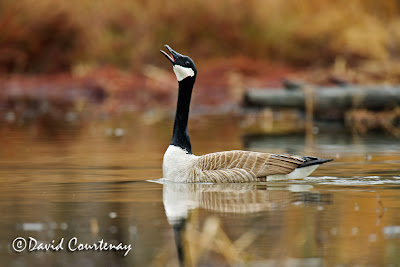 One things that struck me was the amount of woodpeckers around, Not just numbers but also species, I had good views of northern flicker,red headed,red bellied,pileated and sapsuckers,
Great place
Dave
Posted by WPATW at 01:00