On our travels this week, Jac and I popped down to Dorset for a couple of days, took a look at some the RSPB reserves and saw a few sights.  I guess it might be considered a bit of a challenge to ask your new wife to get up at 02.30 in the morning so that we can drive three hours to see a sunrise.  Well I did, she did, so we did.  I love driving at night as there is no other traffic around and you get to see quite a bit of wildlife en route.  On the journey, we saw Barn Owl, Muntjac and Roe Deer, vole, fox and my favourite of all, and it has been a good few years since I last saw one in the wild, was a Weasel.
I will share a few of the landscape/seascape images in future blogs when I have had a chance to process them.
Meanwhile, here are a few of some firsts for me.
First up is a Hooded Merganser - now not unusual for Dave, as this recent blog shows.  But most unusual for the UK, as it is a North American species.  Apparantly it arrived at RSPB Radipole about three years ago and has stayed resident ever since.  Is it wild, is it an escapee? - who knows but it was a real beauty. 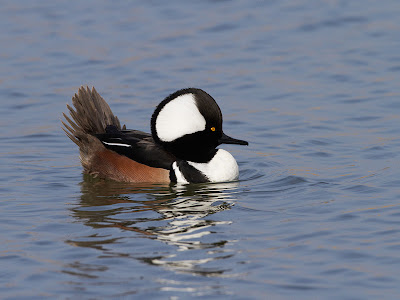 It was quite at home with other Tufted Duck and Pochard.  Other great sights we had at this fabulous reserve were Water Vole, Water Rail, singing Cetti's Warblers, Sand Martins - first of the year, Reed Warblers - first of the year, two pairs of dancing Great Crested Grebes.  Sadly no Beared Tits or Bittern.  The cold winter has had a bad effect on the Beardies.
A mile or so east of Radipole Lake is RSPB Lodmoor and another lifetime first for me was seen here.
This Long Billed Dowitcher was a bit distant, so it was a bit of a crop, but fabulous to see. 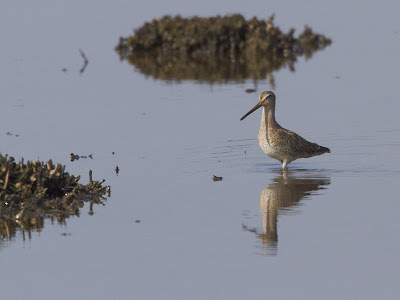 Also at Lodmoor were a couple of Spoonbills, which I will bring in future posts.
The final first is a UK first for me.  I have seen this species before while in Spain, but never in the UK.   There are usually a few records each year.  The lady warden in Radipole at the RSPB said that one had been seen up at Portland Bill the previous day, and as we were heading back there in the afternooon to get some sunset shots thought we might have a look.  But it would be a needle in a haystack moment.....or so I thought.
Arriving at a parking space just after the Bird Observatory, I got out the car, caught some movement in my eye in fornt of the car parked ahead, peeked round the corner and there it was, a Hoopoe grubbing around by the kerbside, hence the visual intrusion of the road and kerb in the images.
I grabbed my camera quickly, shot in brilliant bright horrible light, and handheld only, got off a few shots. 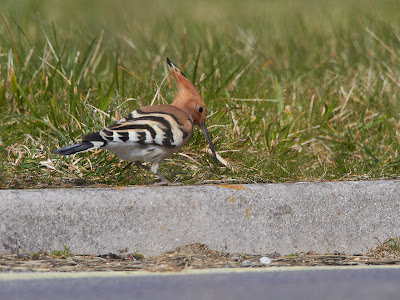 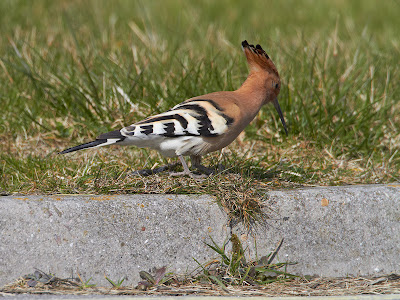 I had to move quickly as there were a couple of runners coming down the hill and were going to run straight by it.  I stopped them for 30 seconds, but sadly they scared the bird away from me, and I never saw it again.
I guess I will take the luck of seeing it within ten seconds of arriving.
While we were there we saw more Sand Martins and Meadow Pipits as recent migrant arrivals.
A fabulous day in Dorset - more to come soon
Martin
Posted by WPATW at 01:00