I have been home from Japan a couple of weeks and really lucky to have got out when i did looking at the devastation on the TV, It brings home just how fragile the Earth and those that live on it are, I dont know what would have happened if the Tsunami had hit whilst we were on the ice breaker just off of the Hokkaido coast, Its just doesnt bear thinking about, I hope that Japan gets sorted quickly but it doesn't look like its going to be that way for some time, I will return there one day and hopefully in the next year or 2 as its the best place i know for wildlife and in all that beautiful snow, I have been going through and processing some of the images from the trip and a few really stand out from the norm , i have printed some and i have to say-stunning, I had a couple of problems with the D7000 when i was out there but looking at my favourite images from the trip alot are from that camera, I still need to send it in and it will go back to Nikon next week as i am off to California next month and will need it then, The camera is capable of great image quality but i do have a nagging in the back of my head when viewing images from it that i do not seem to be getting consistency from it with images either very sharp or slightly off-reminds me of the dreaded Canon 1D MK3 in which i lost total confidence and that's one thing hat you dont want, The D3s shone as it always does-my favourite camera of all time without a doubt and when i was away if i knew that the shots were important like where we shot the white tailed eagles then the D3s was first and only choice, Now i know that the D3s is $5000+ and the D7000 is around £1200 but it should still be 100% consistent, I know that you cant expect every images to come out spot on and i except that but something just isn't right so i hope Nikon will give it a good going over and see if they can track down the cause and put my mind at rest, One things that came obvious was that manual metering is the way to go with it, One day i shot in AV and the metering was at best naff and inconsistent, Its a shame as it is a really good camera and it does show its limitations quickly, I can see why a lot of people who are not that experienced had struggled with it, I always planned to have it until the D400 comes out later this year but after all the problems in Japan i am sure that will all be put back
So here is my favourite D7000 image from the trip, I was a difficult shot as there was heavy snow and that really tests the AF, I know Pete had a few problems with the 1D Mk4 in heavy snow which i think is due to the quickness of the Canon AF system whereas the Nikon system is a tad slower to grab focus but then holds on well even in tough conditions like this, The Canon AF system worked very well with the eagles in flight and you could see the improvement over the MK3 version as when the eagles dropped out of the sky and into the tree line it kept with it and Petes eagle images are stunning to prove it 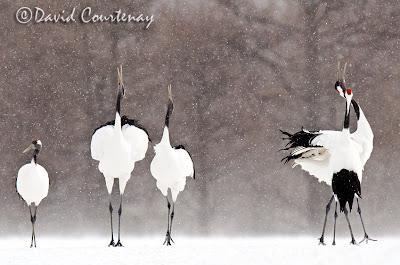 The image is full frame uncropped, The one thing i would have liked is for both cranes on the right to be side on, I do have that shot but not with the 3 on the left, I now have this printed at A3+ and its a stunner-nice and sharp, The snow adds the atmosphere and the birds position and behaviour add the interest

Email ThisBlogThis!Share to TwitterShare to FacebookShare to Pinterest
Labels: japan.d7000.