Having survived the 'Terror from the Skies', our little garden friends have managed to hide well in the depths of the pond in the daytime and 'done good'.

With numerous blobs of spawn that have all been merged together, it looks like we are in for another bumper year of tadpoles and frogs. I just hope we don't get to much cold weather now.

Last year there were over 30 blobs of spawn. This year, it really seems impossible to tell as they have merged them together, but I would estimate that there is at least as much, if not more.

It is possible to differentiate that it has been laid by many different individuals from the differing consistency and size of individuals eggs. 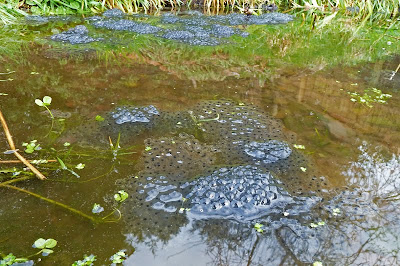 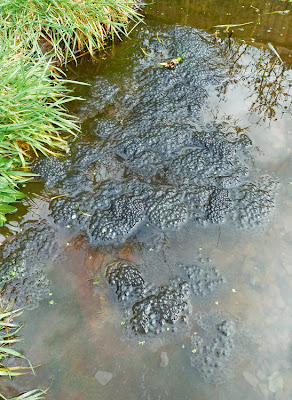 In the second picture, this large mass is about 1 metre long x 0.5metres wide, so a sizeable mass.

When I dug the garden pond three and a half years ago I made in two distinct parts. The area where the spawn has been laid, is a shallow shelving area, going from nothing at the edge to approximately 300mm deep. This area is good for the spawn, and great for bathing and drinking birds to use. From the middle of the pond, it then drops to a deep sump approximately 1 metre deep. In here, I have put some large bricks with a slab over the top, on which I have set the pond recirc pump to feed the top pond to run the stream. It is this deep sump that is vital for the frogs, newts and damsel dragonfly larva to seek stable temperatures during the winter avoiding the ice, and also provides refuge from the avian predators such as Heron.

We had our first Spring migrant bird through the garden today, with our first calling Chiff Chaff. Great to hear and a taste of things to come. Twitter reports are full of sightings of Sand Martins and Wheatear coming through now, so I am looking forward to the next couple of months as things change with the new season.
Martin
Posted by WPATW at 16:32

Email ThisBlogThis!Share to TwitterShare to FacebookShare to Pinterest
Labels: frogblog 2012