As promised a couple of days back, I said I would bring you some orchid images.  At my local patch where I reported that the Bee Orchids got decimated last year, it is great to see that the mowers have stayed away.  The only difficulty that brings is with all the long grass it can be difficult to get clean shots.


The first of the Common Spotted started to appear with stems at the end of May.  This first image below was taken on June 2nd 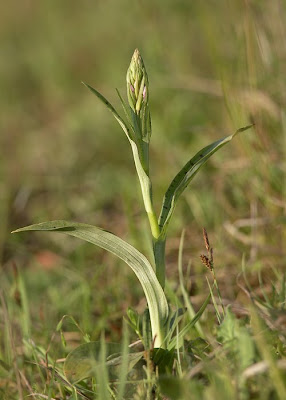 Many have been in the open, but a few hide quite nicely in the deeper growth of wild flowers. 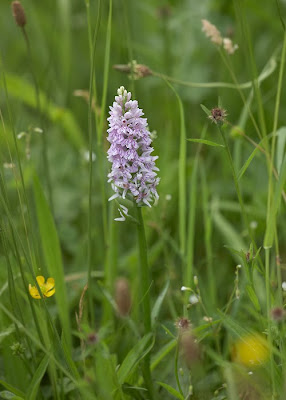 It is still early days for many of them as you can see here.  So I reckon they will be at their best this weekend and next week for the Spotteds (The 2nd, 3rd and 4th images were all taken this past weekend) 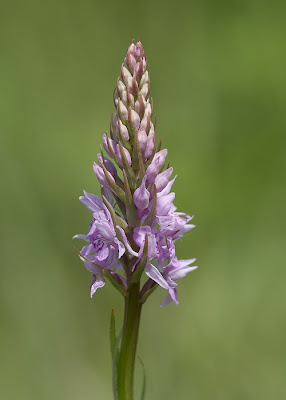 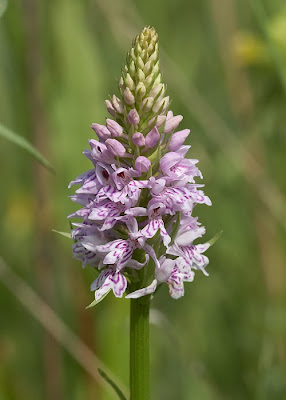 The Spotted, i.e the Dactylorhiza forms do a lot of cross breeding and hybridisation, and so you see many forms and colour variations.  As you can see from this previous image, it is quite different from the one before it.

It has been great to see many of the Bee Orchids  Ophrys apifera coming up.  Last year there were also some bi colour forms present but there are currently none in that area, but I will check again soon. This stem is probably the most advanced at the site, with plenty of others just coming up such as this next one. 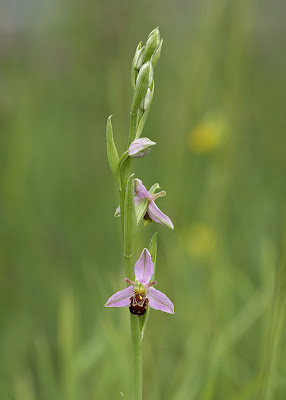 I also checked out the Pyramidals too, Anacamptis pyramidalis.   There are quite a few coming up in their very early stages. 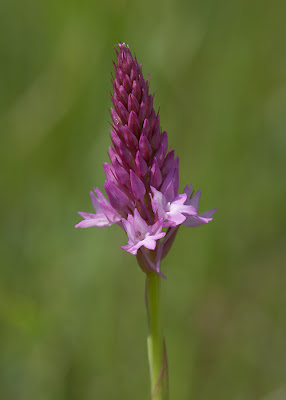 This is probably the most advanced stem I found.  So again I will be following their progress and getting a further set of images.
I did check out another location where Wasp Orchids are also recorded each year but there was no sign at all.  So I will keep my fingers crossed and take another look at the weekend.
All images were taken with the new 'old' 5D and the Canon 180 macro lens.  I really do love that macro lens, and I also love working with the 5D again.  Full frame is very nice, and as Dave mentioned recently, the DOF effects are really quite excellent without a crop sensor.  I think a 5Dmk2 beckons.
As I type this blogpost on Tuesday evening for posting tomorrow, I have just switched on my moth trap.  I mentioned back here that this was a forthcoming project,  Well I got the electronics last week, built it over the weekend and finished it off tonight.  It seems like a good evening weather wise for it, so I will see what we can bring in.  I will do a more detailed blog with construction pictures, and share some of the pitfalls and share a few tips if you want to have a go at this yourselves.

Finally, check back in later this evening as I will update this with some Southern Marsh Orchid images that have come out at work, so I will get some images at lunchtime, and upload them for you to see.

Update:  As promised a couple more images for you, fresh out the camera from this lunchtime. 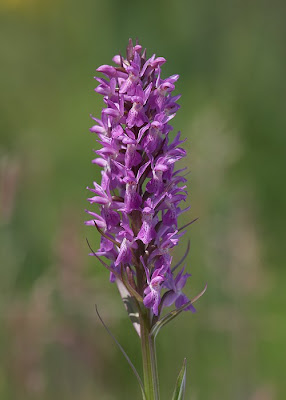 One of 92 stems I found of Southern Marsh Orchid at my work site.  I am sure I missed a few others as well. One in 100.
Ok I know it is "another" Common Spotted, but this single stem was growing on its own as a species with the hundred Southern Marsh orchids I saw today, so I thought it right to include it.  Tricky bright harsh midday sun but an A4 pad used as a reflector helped balance out the exposure a little.