With some nice early strong light, I popped out for a quick trip before breakfast to the small nearby loch with the Whooper Swans and got a quick couple of shots off in some quick strange early morning light.
This first shot was a one off with no repeat opportunity with the receding line of birds in formation. 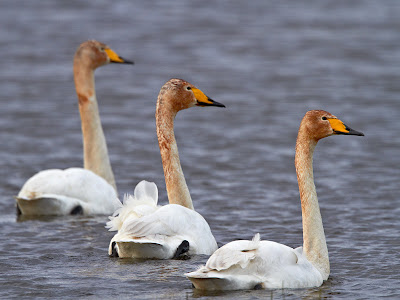 I would have preferred to have got the centre bird sharp really, and with a bit more space all around but sadly the opportunity for the line of three like this didn't repeat itself. 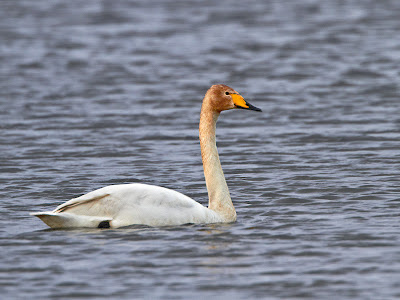 So what's with the colouration around the head?  From our previous day's trip when we went here with Steve Duffield, he advised that the brown colouration is a take up of peat from the water and the soil.  I didn't realise that there were also so few breeding Whoopers in the UK as mentioned in Springwatch last week.  Well we were fortunate enough to see some chicks later in the week which I will post when I get to that day.

Jac and I recovered some of the ground we had covered earlier in the week through Wednesday and ended back at the reed bed area, quite near where the Swans were, trying to get some decent images of the Linnet that were there.  All of a sudden, Jac saw a large bird close by.  We stopped and got the cameras out to catch this beautiful ringtail (female) Hen Harrier. 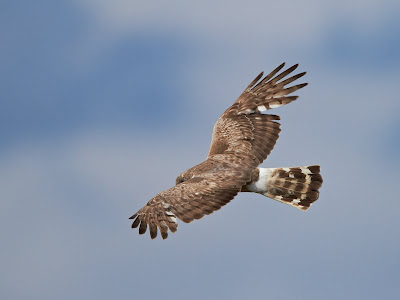 This was a 'so near yet so far' shot.  Frame filling but she didn't put her head up for the best shot as she was surveying the reeds for prey.    Just one little head lift was all I wanted.  Hey ho.
We also covered some new ground onto Berneray and across to Lochmaddy where we finally saw our first eagles on the Uists.  We got three Golden and Two White Tailed within about twenty minutes.  All were at extreme distance and for scope viewing only, but it was wonderful to see them.
Back on Benbecula we had another try for Red Necked Phalarope but no signs.  Talking to another couple of birders there, they were seen on the Tuesday.  We had tried on the Monday and Wednesday!! - another one down to the Law of Sod.
Heading back towards the accommodation, we took a quick run down towards Balranald.  Just after turning off the main road, we had previously been aware of nesting Redshank close to the road, but this time driving through we could not believe how brave one of the parents were.  Driving by slowly, one of them got up and put down on the road in front of us.  I slowed even more but the Redshank promptly proceeded to walk, quite quickly, up the road in front of the car.  It finally got out of our way about fifty yards further up the road.  What a plucky little mum or dad it was.
Just a few yards further up the road we were in Corncrake land.  This time with the sun in a better position we managed to get a few shots.  However, the heat haze has taken quite an effect on these shots. 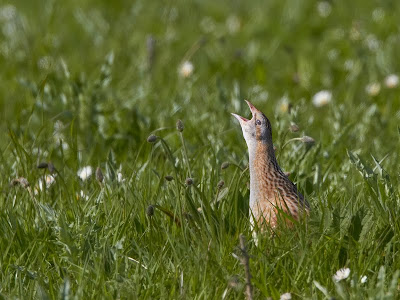 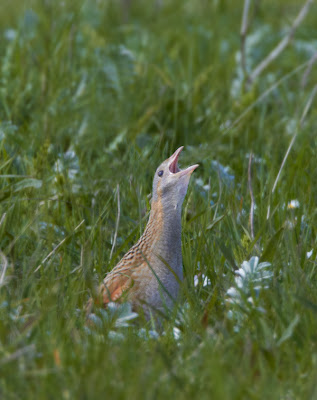 With a little bit of cloud cover
But it was wonderful to see them and catch them calling in the classic Corncrake pose.

Another quick trip out again later in the evening after supper saw yet more Short Eared Owls as well as female and male Hen Harrier. 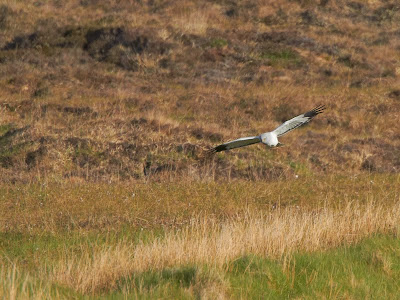 Another big crop, but I loved the late sunlight
What we did see that was quite appalling was another photographer promptly climb a fence, walking and chasing a Short Eared Owl across the moor just off the Committee Road.  So driver of that old maroon 4 x 4 if you are reading this, you should be ashamed of yourself.  Try fieldcraft, and if that doesn't work, then go back another time.
Thats it for the Wednesday.  In the next installment, Day 6, we went seawatching down at Balranald, so next time we will have some sea birds for you.
Martin
Posted by WPATW at 18:48