Following on from my Part 1 post, our target bird came into sight and swooped down towards the fish on the water surface. 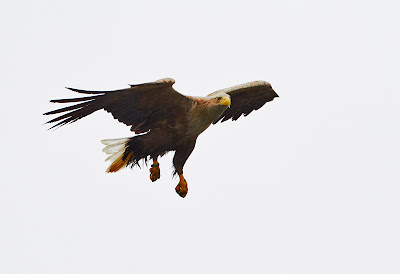 As you can see the light was just truly awful - grey and flat - but what a sight it was. (Looks better in large if you click on the image)
Now the plan was to get some images of this male White Tailed Sea Eagle taking the fish  from the water surface, but I really messed up on the camera/lens selection.  I really didn't appreciate quite how close it was going to come towards us.  This was taken with the 7D and 500f4L.  I also had the 1Dmk111 and 300f2.8 ready but the speed of the stoop and prey take was such that I had no chance.
So how would I shoot next time?  7D and the 70-200f2.8 IS L zoom would be the weapon of choice.  You could then zoom out to suit the size of the subject as it approached.  As it was the eagle came to within 25 feet of the boat, so I was well 'over -lensed'.  Clearly you get the light you get on the day - again maybe I should have put the flash on for a bit of fill light.  Live and learn.
Sadly neither the male or female came back again for a second fish so there was no second chance. 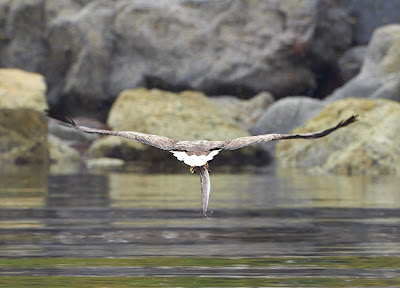 The one that got away (the bird not the fish)
With the resting male safely distant from the nest site, Dan moved the boat in closer to the shore line and I was able to get this shot. 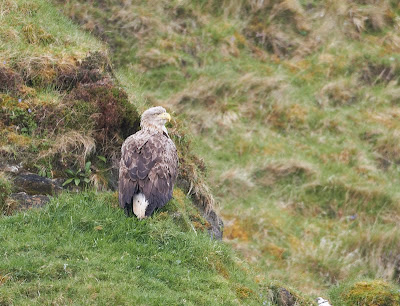 We then went across the bay checking out other sea birds's, mostly from the Auk family.  So if you find yourself on Skye, I can thoroughly recommend a trip out with the guys on MV Stardust.
We will certainly hope to get out with them again in the future, and with a better plan next time.
Back on land, we grabbed a cup of tea and then pushed on up to Uig to get the boat across to North Uist.
Caledonian MacBrayne ferries operate the route across to Lochmaddy from here..
The sea was dead flat calm, almost glass like so it was a great time for seawatching. We had some great views watching Auks, Gannet, the occasional Diver and Manx Shearwater flying by. 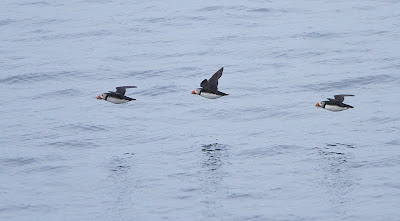 3 Puffins doing the 'Ducks on the wall' impression 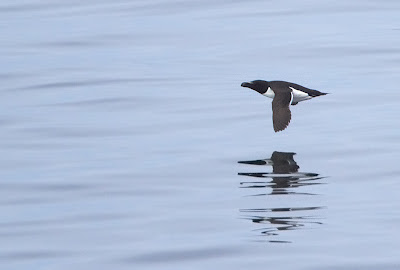 Razorbill (I liked the squiggly reflection on this one)
These last two shots are shown for record purposes - again the light was still flat, and they are massive crops.
We were hoping to see something that lived in the water rather than above or on it though.  After about forty minutes we were rewarded with a sighting of a distant pod of Common Dolphins.  There were about six that were visible.  Ten minutes later, two much larger pods were spotted and they were racing and leaping to try to get across to the ferry to ride the bow wave.  They didn't make it in time but they did give us some great views. 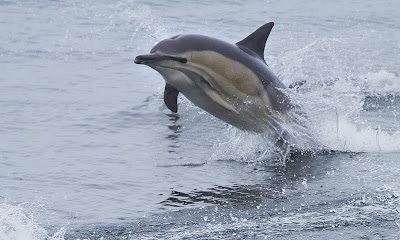 It was quite difficult to judge exactly where they were going to pop up, but I am pleased I got this one.
After about another 20 minutes, we sailed into a thick bank of fog and the sound of the ships foghorn was not appreciated by a couple of dogs that were on deck with their owners.  As quickly as it came, the fog cleared and we had great views of the coast of North Uist as we entered the harbour area.
In Part 3 of day 1, I will bring some more images that we got on the short journey across to our accommodation and from our first evening trip out.  So come back in a couple of days time for some Short Eared Owls amongst other species.
Martin