In part 1 of day 1, we had travelled to Portree on Skye, and in part 2 we had just arrived on North Uist at Lochmaddy.  So it was just a matter of a short drive to the western side of North Uist to find our accommodation..
Within a short distance of leaving Lochmaddy, we were onto single track roads with passing places.  If you are not used to these, then you need to keep your wits about you with oncoming traffic.
After about five minutes, we picked up a couple of Cuckoos on some telegraph wires - too far to photograph but great to watch through the binos.  Pushing on across the fantastic landscape, we stopped at the local Co-op at Sollas to stock up with milk and bread and other bits of food shopping.  Moving off, we followed a small flock of sheep being shepherded along the road.  Winding down my window, I heard my first Corncrake sounding it's definitive 'crex crex' call and watched a shouty Snipe calling from a fencepost.
We passed the sheep and lambs and progressed another couple of miles when I saw what I thought were a couple of buzzards half a mile up the road.  Stopping the car, a scan with the binos revealed them to be a couple of Short Eared Owls scrapping.  Getting the camera out of the back of the car quickly and resting it on the roof rails, I got a couple of images.  The light was still grey and flat and most unhelpful.  Note for future posts I will refer to these fabulous birds as SEO's for ease of typing. 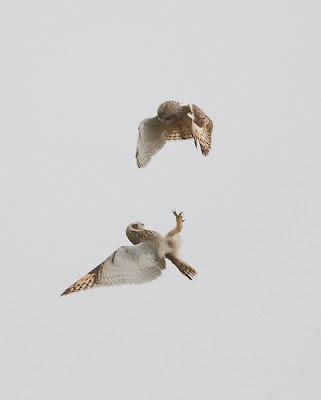 Just a record, again quite a big crop.
Moving off at that little bit of excitement, we passed clsoe by Whimbrel and Oystercatcher, and then saw another couple of Cuckoos, one of which was being chased off by a Meadow Pipit.
Another half mile further on and Jac called that there was an SEO on a post.  We pulled into the first passing place, taking car to stop at the far end of it, so that it was still usable by other motorists.  The SEO moved away by two posts but I grabbed this shot through the window, with the camera resting on a beanbag. 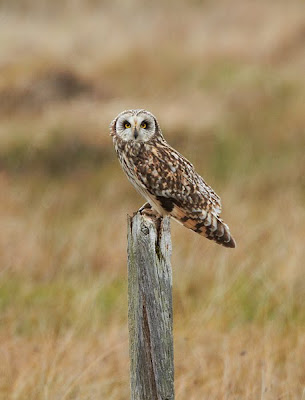 A Stunning bird
Moving off, we got to our lodge five minutes later and the engine was finally switched off after 660 miles and almost 24 hours of travelling.
The first thing I did was to grab the binos and take in the sights in our garden and near surrounds.  White Wagtail, Pied Wagtail, Snipe, Oystercatcher, Swallows, Tufted Duck, Ringed Plover, Common Tern, Common Gull, House Sparrows, Lapwing, Dunlin, Curlew, Redshank - all at first glance.  What a stunning place.  I will share pictures of the place we stayed in later episodes.
After getting all the gear out of the car, stowing it away, grabbing some food and drink, I set up my bird feeder I had bought with me, and within a few minutes the House Sparrows were down helping themselves. 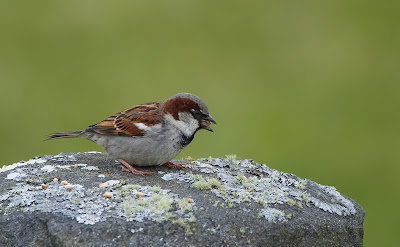 I was keen to get out with the cameras so after supper we headed out and grabbed a few shots from the Committee Road, a small road (although they all are on North Uist) that runs north-south through the middle of the island.  This was to prove a happy hunting ground throughout the week and we found ourselves there many times, and we were never disappointed. Always SEO's and Hen Harriers, at every visit.
At the bottom of the Committee Road, about were we saw the scrapping SEO's shown previously, there was a stone sheepfold that was quite popular with Starlings. 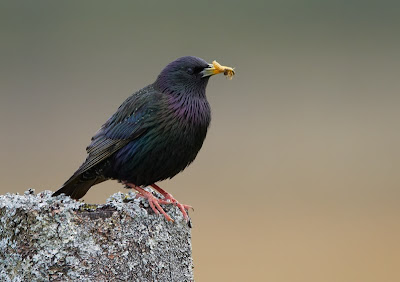 I was surprised at the number of Starlings on the Uists.  From previous visits to Mull I never really saw them in the same volumes.
Back up the Committee Rood, we found Stonechat on the heather tufts.  Both of these birds were juveniles, but wone was quite a bit younger as you can see that it still has quite a bit of it's baby gape still evident. 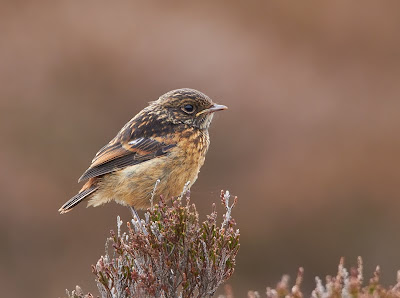 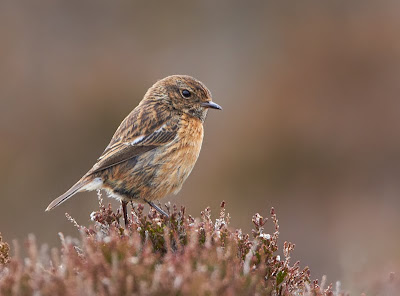 So with the light fading, at least photographically, we headed back to our lodge for a welcome bed waiting and get some rest before we set about exploring these islands fully in the rest of the week.
In the Day 2 report next time, I will bring you images of some the birds you expect to see on the Uist's at this time of year, in some unusual light, and also a surprise that I wasn't expecting.  Come back in a couple of days for the next instalment.
Martin
Posted by WPATW at 05:00