We woke on the Sunday morning to a grey, misty and occasionally foggy morning, with slightly cooler temperatures while mainland UK was basking in extreme hot temperatures.  After a 'relative' lay in - well it was Sunday and we had a tiring previous 24 hours or so, we set off for our first whole day out.
Balranald RSPB reserve was a couple of miles south of where we were staying so we made our way towards that.
Stopping en route, we found this singing Skylark 'grounded' by the fog.  It made for an evocative scene for us. 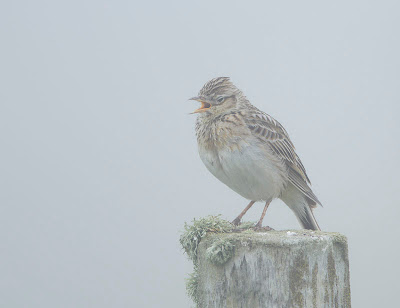 A little further on we found our first corncrake of the day.  Well at least we heard it time after time, but it was quite happy not too show, although we did catch this particular bird later in the week.
Moving on, we could see many 'birds on sticks' or fence posts to be more accurate.  There are hardly any trees on the Uist's so the best perches are fence posts.  At least they take on a nice weathered look and usually have lichen on them like the Skylark image above.  Many of the birds are breeding at this time of year, and the area has a stunning number of breeding waders present.  So one of the parents is usually up on a post keeping lookout.
Driving down through the reserve we saw lots of waders feeding on the machair.  Many of these birds were still on their passage north.  We saw numerous Dunlin, Turnstone, Sanderling, Ringed Plover and Whimbrel here.
Wheatear were common throughout the islands, but I find that they are quite flighty when a camera is around. 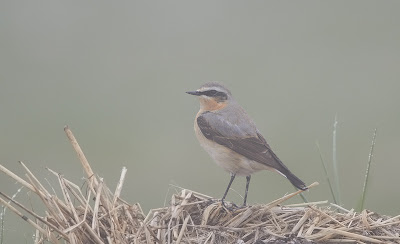 Wheatear in the mist
We heard a few more Corncrake, but they were still being elusive to our views.
Down at the bottom of the reserve near the sea watching point, with the mist now clearing, I heard the distinctive 'jangle of keys' call and soon found another of the target species of Balranald, the Corn Bunting. 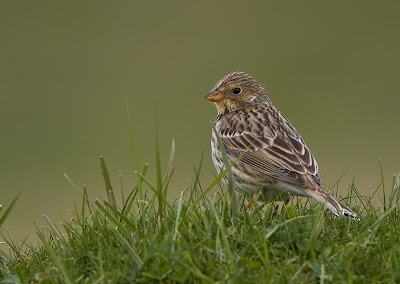 Corn Bunting
Moving on from Balranald, another Skylark showed so I took the opportunity to get some fog free images 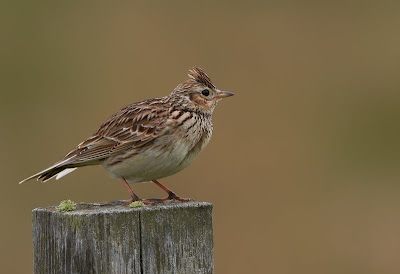 Nice to see with the crest up on this Skylark 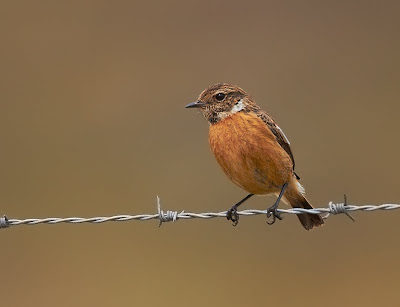 Across the moor, another Stonechat showed, this time the female.  The pretty males eluded me on this trip throughout the week sadly.
Greylag Geese are plentiful on the Uist's and were regularly seen on the numerous lochs, grazing on the short grass, or tending to their small flocks of goslings where they were present. 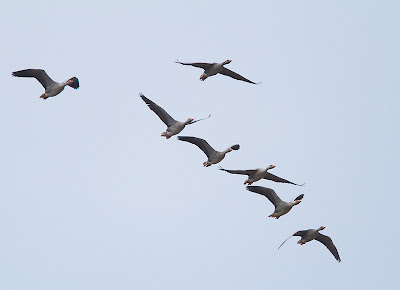 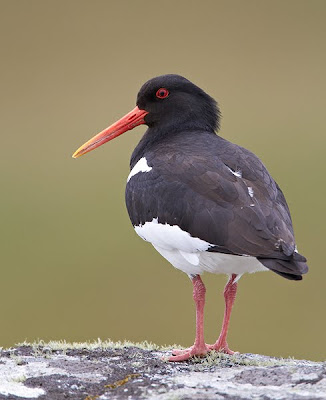 As on my previous trips to Mull, Oystercatchers were very common birds and were readily seen everywhere you went across the Uist's.
We had some fantastic sightings of Hen Harrier again on the Committee Road, three males and one female, and another couple of SEO's.  We finally managed to get a view of the Corncrake, albeit not photographable.
Finally, and sort of unexpectedly, we saw this bird 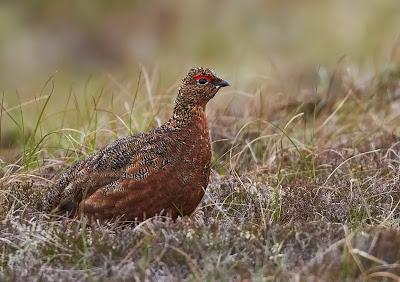 Red Grouse
Now I really wasn't expecting to see them on North Uist, although I knew that there were a few there.  It seems that talking to others on the island that we were indeed lucky to see it.  I guess this bird must have been a bit daft, as if it hadn't been stood up like this I would have driven past it.  It was just the profile shape that I saw that alerted me to it's presence.
So that was Day 2.  In Day 3, we went further afield on to Benbecula and South Uist and got some different birds plus I took a few general landscape images as records to show the geography and topography.  We did get some great SEO in flight images plus a few shoreline waders.  I will share Day 3 with you in my next posting
Martin
Posted by WPATW at 05:00