As I reported two days ago here, this years Scottish trip was to North Uist.
So with the car jampacked loaded with camera gear, optics, food, drink, and clothes, a tankful of diesel, and some extra air pressure in the tyres, we set off from Stratford on Friday evening with a drive through the night  with a rest up at the top of Glencoe in the Highlands.  It can be a great place to see the sun come up for landscape photography if you get some good light.  After a few hours of very uncomfortable sleep in the car it was gloomy grey light that greeted us, while outside the Red Grouse and Cuckoo sounded wonderful.  Some great views of Red Deer made up for the lack of a good sunrise.
We pushed on down through Glencoe, stopping briefly to take this shot of the magnificent crags in the Glen.  Sadly the 5 am morning murk not doing it any justice.  Although the cold blue light makes a change from many of the shots I have seen of Glencoe 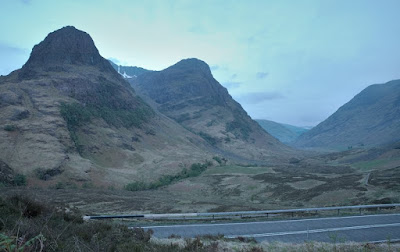 At the bottom of Glencoe, the view opens up over Loch Leven.  The air was totally still and the water surface was like glass and small pockets of mist hung on the mountains.  It was a beautiful sight. 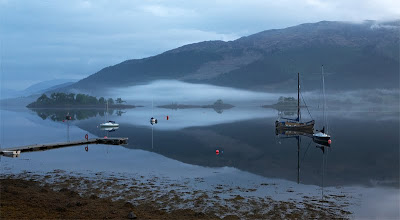 Stopping off briefly in Fort William for a fuel top up, we pushed up the Great Glen, with great views up to Ben Nevis with a lot of snow across the tops,  before turning left towards Skye.
We stopped off at 7am at Eilean Donan Castle for a cup of tea and a bite for breakfast.  Once again the light was grey and flat, but we heard and saw quite a few woodland birds. 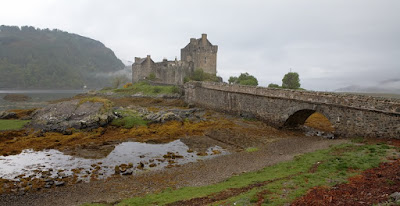 As we drove up the eastern coast of Skye, I saw a movement on the flat calm waters opposite Scalpay.  Pulling into a convenient layby, we were priviledged to watch a dog Otter for about twenty minutes quite close to the shore swimming and feeding.
A short while later, we pulled into Portree and parked up.  After a welcome cup of coffee we grabbed the cameras and walked down to the harbour and hopped on a small boat for a trip out towards the Isle of Raasay.
Looking back at Portree, I grabbed a postcard image. 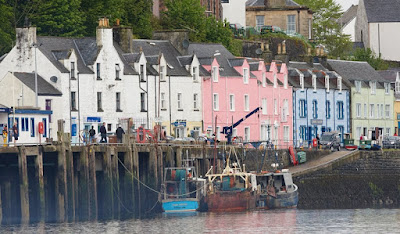 Passing Red Throated Divers, Shag, Guillemot, Black Guillemot, Gulls, Puffins and Cormorant as we pushed across the bay, we came to under a craggy mountain. 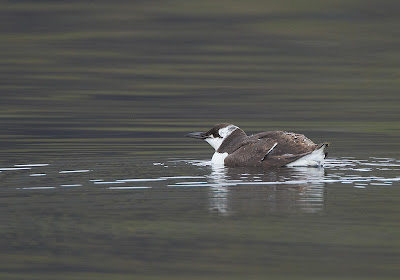 Dan the skipper threw out a large fish into the water. A few seconds later, this Great Black Backed Gull swept down and took it away. 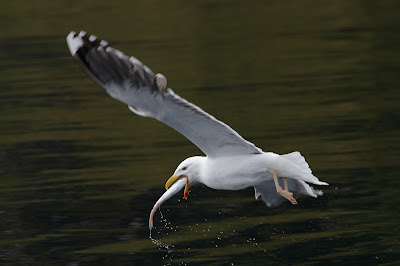 However, this was not what we were here for.  So after the Gull had cleared off, Dan threw out fish number two, and our target bird took to the air from the crag.
In the next part of the trip report, you will see Britains largest bird of prey swooping down towards it's breakfast and on the ferry crossing to North Uist, we also managed to capture images of one of the worlds favourite sea creatures leaping from the water.  Come back in a couple of days to see the next report.
Martin
Posted by WPATW at 05:00