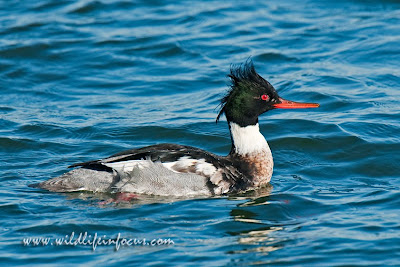 When i lived in Switzerland i used to photograph the Common Merganser or Goosander as we called it in the winter, On one occasion i was in Geneva and there was a Red Breasted Merganser with the Goosanders, It was the one time that i didn't have my cameras with me and i always regretted it and have always wanted and good clean shot of one for my files, When i was in New Jersey there were lots of RBM's flying around but always down the centre of the channel which was about 1/2 mile away, I had been there a couple of days and had kept an eye on the birds when i noticed that when the sun was going down the RBM's would leave the channel flying up the centre towards the open sea then taking a hard right and would fly past the end of the jetty, So one evening i positioned myself near the jetty end and low and behold i had a couple of fly bys that i managed to convert into nicely lit sharp images, I seem to remember punching the air when checking the screen and histogram, One day also saw one of the RBM's fishing out in the channel, They can stay under water for a considerable time and it popped up in front of me in good light, It stayed for a few minutes before it was gone so i ended the week with both static and flight shots of a bird that was high on my wanted list, you cant ask for more than that but it does go to show that if you watch your subjects  behaviour over a period of time that it can/will work in your favour
I have actually quite a few images of both males and females from the trip but as i have said before my PC is still playing up after some kind folk sent a trojan horse over the web but its nearly sorted so again these are done on my laptop and proper service should resume next week
All images are full or near full frame-all shot with D3 Nikon with 600mm VR and extenders 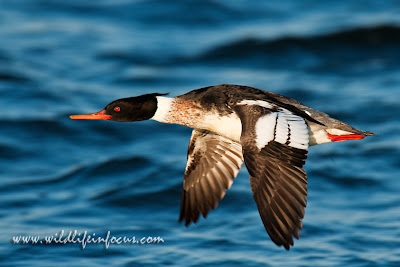 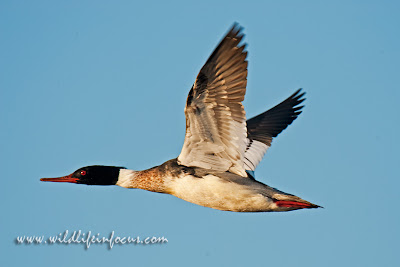