Chancing my luck - not very well

Last night when I got back from my run - yes still at it - I was just cooling down outside in the back garden when I saw a bat flying close by and very slowly.

It was quite light at the time, and I watched it for a while, and then thought, why not!!

So with the 70-200f2.8L - needed the fast light gathering of that lens to give the AF a fighting chance, popped the 580EX on, set a manual exposure and tried to capture it.

First few goes weren't too good - only had single AF point set, but then I closed down the aperture to give me a DOF chance in the darkening skies, and relied on the power of the flash.

First one isn't so good - second one is a bit sharper. 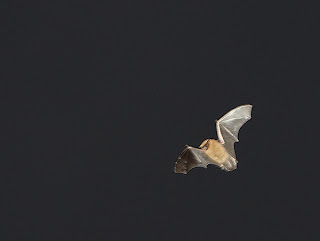 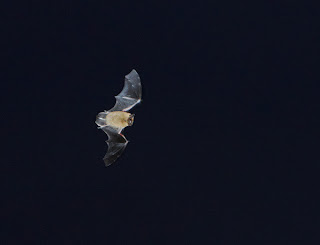 Well I learned a bit from this and will try again.

I will use the 300f2.8L as it is about the fastest focussing lens I have, plus I won't need to crop so much (these were big crops), I will set AF points to all, plus all assist points, as there is only sky for background so nothing to confuse the AF points, and I will get out there earlier when it is lighter.

So watch this space for future attempts.

Not classic usable images - but good fun trying
Martin
Posted by WPATW at 08:00

Email ThisBlogThis!Share to TwitterShare to FacebookShare to Pinterest
Labels: bats