While thinking about what I was going to write for today's blog on my train commute today, I had originally planned to tell you about my Tuesday trip to the WWT London site where I did a few crappy 'live blogs', that judging by the complete lack of comments was not a success.
Anyway, I still have the images to process and will do those over the weekend and share some of my impressions of the place and my frustrations with wildlife reserves when it comes to hides and photographers.
Due to train problems on my usual route home, I ended up on a different line which require me asking for Jac to come and pick me up.
On the drive back, she said that there was something she wanted to show me, which obviously we would not have ordinarliy seen.
Sadly it was this dead Tawny Owl beside the road, less than a mile from our home, it has obviously been hit by a car and succumbed to its injuries.
I took the image, not out of any macabre sense of gore, but simply because it is very rare to see such a bird close up in daylight unless it is captive.
I see substantially more Little, Barn and Short Eared Owls each year compared to Tawnys.  We hear them plenty of times, particularly at this time of the year.
Image was taken with the Samsung Galaxy S2 phone, and its not bad is it really, for this sort of instant blogging style. Certainly the first half decent camera on a phone I have ever had. 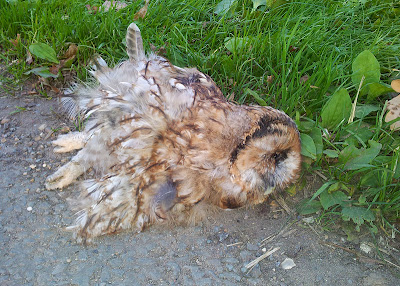 Back next time with a range of different images from  London