It's the middle of September, so that means its car MOT time for my seven year old BMW.  Yet another straight pass, no issues, five in a row.  Always a relief to get through at no extra cost.
Never mind that though but on the way back home, I dropped into one of my favourite fungi woods to have a quick look to see if there was much about and whether it was worth making a foray over the weekend with all the main camera gear.  Dodging the heavy showers that we are having at the moment, the only camera gear I had was the rather cracking little camera that is on my Samsung Galaxy S2 android phone.  With a macro AF setting, a reasonable flash, and anti shake, as camera phones goes it is better than most.
The only fungi I found was a few Fly Agarics, nesting exactly where I expected them, in a small area of Silver Birch trees.
So in the darkish setting, using the flash, I got this shot.
One of the delights with the ultra small focal lengths with camera phones on tiny CCD chips is that you can get wide angle close up shots, something a bit difficult with a lot of DSLR close up work.
So clearly not in the same quality league as my usual macro kit, here is one of the them from today.  A bit bright in the highlights, but sadly no control over the flash power. 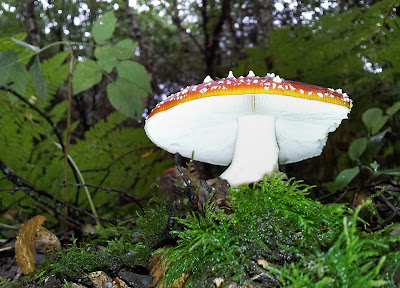 So it is still early in the fungi year, but I will keep checking and keep fingers crossed for a 'good fungi' year.

Email ThisBlogThis!Share to TwitterShare to FacebookShare to Pinterest
Labels: fungi