Tips and Techniques - another use of the spirit bubble

Back in July, I posted my tip about not leaving spirit bubbles in sunlight for too long as it bleaches out the fluorescent green, as I posted here.
I also said in that post I would talk about another tip using the spirit level.
Way back when, in May to be precise, when I was on North Uist, I was finding that with the reduced field of view that you get with the 7D (1.6 crop), plus 500 + 1.4, I was finding it quite hard at times to pick some moving subjects up in the viewfinder, sometime when quite close due to the narrow field of view.
Now given that I initially pick my subject up, while panning or tracking, by looking over the camera, I set my mind to work on how to get a rifle type site to initially acquire the subject, and then get it reliably in the viewfinder.
Firstly, I realised that the knurled knob on the lens hood would be my foresight
I started off using just that initially, with the hot shoe acting as the rear sight.
Clearly the alignment was way off  and the subject was out of shot.  My next thought was to fashion a blob of blu tack, except I didn't have any with me at the time.
Then the penny dropped and I remembered by spirit bubble level that fits in the hot shoe.
Initially in 'low' mode, it wasn't still quite right,  but turning into 'tall' mode it was just perfect.
So with that in place, the camera on the tripod and sidekick, I had some accurate top sights that gave me much greater reliability of picking up flying subjects.
Here are a few images to illustrate. 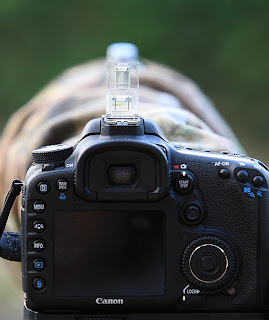 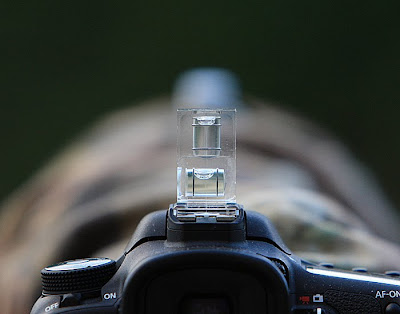 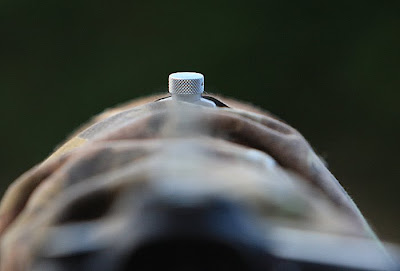 Try it some time