Shock of my life

On opening the curtains this morning only to see a White Tailed Sea Eagle eating the frog spawn in my pond.  I banged on the window and shouted at it to leave the spawn alone, but it wasnt having any of it.  I ran downstairs opened the backdoor and chased it away.  Sadly I have now lost more than half of the spawn in the pond.

I was so upset I didnt even think to get an image of it at the pond, although I did get some while it was circling over head before it flew away. 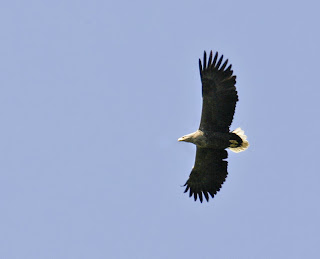 Now I think there is a link and reason for this incredible story.  Shortly after this episode, I became aware of this story on Birdguides.