Weather has changed my plans in more ways than one, Firstly our trip here was originally planned to meet up with our buddies from the UK and if you have seen the world news lately you will know that the icelandic volcano spewing ash into the atmoshpere has halted all flights from Europe,Needless to say that our friends holiday has now been cancelled and we are here in Orlando alone, So we have changed our itinery abit to allow some time at Gatorland where the rookery is supposed to be at its best but we also have a day or 2 of rain, So its Mickey Mouse time for a couple of days taking snap/holiday shots before back to business with the wildlife, I have processed a few images for the blog but as its on my laptop i will do them properly when i get home, I supply photo agencies and these days when everybody is having a go at selling or giving away images its very competetive so to get images accepted you have to have your subject doing something interesting as well as having good light,exposure,composition and sharpness, In other words your images have to be perfect and appealing, If it doesnt tick all the right boxes then its rejected, so with this always in mind i rarely shoot a standard/stock type image and will always try to get the subject doing something, Here is a fairly standard type image, Nothing out of the ordinary apart from its beak is open, On the skimmer is does show its rather strange beak so i took the image 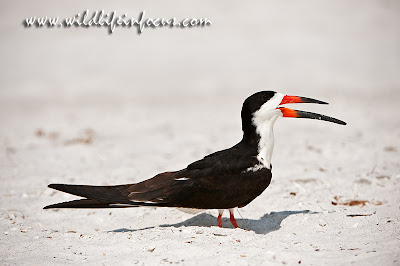 Skimmers were one of my main targets, I had never seen one before but had wanted to shoot them for a long time, I really wanted to get them 'skimming' where they fly with the lower beak in the water, I only saw one try to skim once during my stay and he kept bouncing back into the air when his beak went into the water, this was the best i got from just a handful of shots 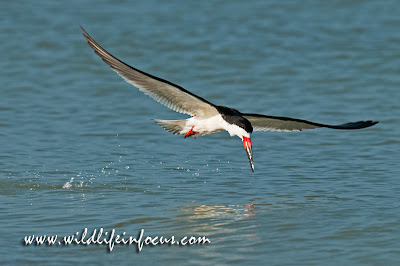 Most of my time was spent watching the birds behaviour, I noticed that the skimmers and gulls would bathe in the shallow water then dip under the water time and time again faster and faster and then suddenly flap their wings and take off, I spent a whole morning capturing this, As i dont like to crop or crop very little i ended with hundreds of great images with clipped wings but i did get some images that i was very pleased with and exactly what i had in mind-this one in particular which is my favourite Skimmer image and is full frame 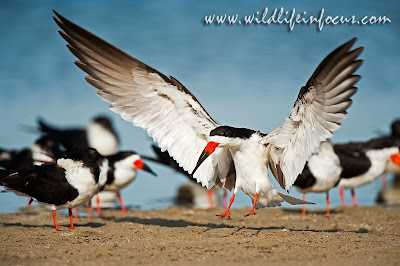 The Laughing Gulls were very vocal and in full mating mode, There never seemed to be 10 minutes between gulls mating which gave plenty of shooting possibilities, The problem was getting a clear image, Again i watched them for sometime and noticed that at the end of the mating the female would start to walk about with the male still on top, This would be very quick before he either finished or fell off, I tried to get this on camera and one of the clearest images was this one 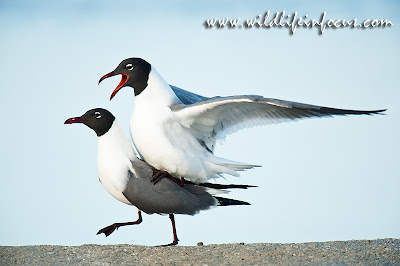 As Gulls go the Laughing Gull is very nice-Good looking, Always up to something and has a really nice red mouth, All in all very photogenic
The light was always very consistent allowing me to shoot in Manual mode, Very few of my images had bad exposures and most like the shots above needed no adjustment other than some curves and a small amount of saturation
All images above are Full Frame with the exception of the Skimmer in Flight which has a small crop