One of the features that came in with the Canon 1Dmk111 three years ago was the micro AF adjustment - the ability to fine tune the focussing point of the camera, to dial out any front or back focussing.
As one of the 1D111 shooters that experienced AF issues, I got all my primary lenses calibrated by Canon.
Now this feature has been carried through into the 7D, as one of the many advanced features that has subsequently worked its way down the range.
As regular readers know I have also been using the Canon 7D as well since the turn of the year.  Well, I have been so impressed with it, I thought I better buy my own rather than keep stealing Jac's, and lumping her with the 1D.
So the second 7D arrived on Monday and I wanted to make sure all functions worked properly before I need to use it on any critical applications.
I frequently see posts on various forums where people get brand new kit just before a big trip, and then get disappointed when something doesn't work correctly.  As Dave has written many times, you should be prepared , test your kit and he covered that very well when he shared his practice dives with his waterproof housing.
Well I sat down with four lenses, two 7D bodies,  two extenders and a cup of tea on Tuesday night with my home made focus target.
Basically an old door set on edge marked up with some permanent marker lines, set at 45 degress to the camera to give some depth.  Camera on tripod, not too far off minimum focus distance, Av mode set wide open, spot AF point which gives the smallest AF area in camera, L jpeg with Landscape picture style (which has the sharpest in camera processing).  Just follow the instructions in the manual - it really is very easy.
Take a picture, zoom right in close and check the main focus line, and the relative DOF blur of the two lines ahead and behind.
One body needed about +2 on most lenses/extenders, the newer body only needed adjusting with the 300f2.8 when used with either the 1.4 or 2 x extender.
Took me about thirty minutes all in all, and reassuring that focus is now spot on.  Plenty more real life testing as well also confirms the settings are now spot on. 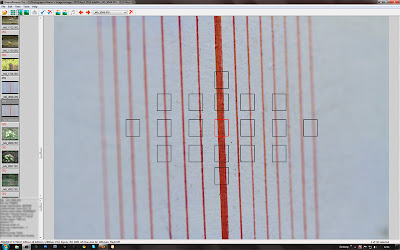 Here is one of the test images viewed in Breezebrowser, with the AF points superimposed. 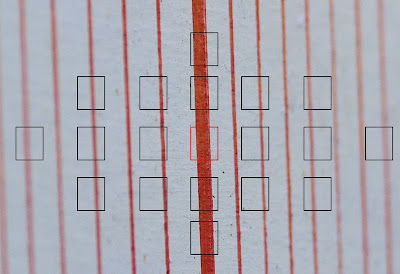 This one is a crop of the central area to show the detail a bit more.  This was with the 300f4L + 1.4EFTC
I took a walk out in to one of the local woods last night, so will update with some of the emerging wildlflowers and let you know when to get out for the best bluebell images in my next post.
Martin
Posted by WPATW at 05:00