I phoned the captain of the boat i had booked in Crystal river a week or so ago and got some bad news, The weather had made the manatees leave the clear springs and they had gone into open water-water that was very murky, My heart sank, I knew i was late in the season but had hoped to still get a shot or two, I said to my wife that we would still go and do a recce and then return in the winter, First morning out and 17 manatees spotted and 3 shot, The water wasnt as bad as i had thought and one manatee loved to have his image taken and his tummy rubbed, I swam with it for over 30 mins and my manatee dream that i had had for 20 years had come true, Its an awesome experience, over 1500 pounds and as gentle as a new born, The water was clear but with a green tint to it, The second dive bought the same manatee but along with a pup, I shot both but only managed a couple of shots together and the water was very cloudy as we had other people with us and the silt had been stirred up, We ended the dive in one of the springs where the manatees spend the winter-its an incredible place-sooo clear its unreal, two suprises, firstly a manatee was sleeping in there all but in a restricted zone i still managed to get some shots and there was a gator lurking in the shadows so i can now boast that i have swum with both manatees and gators, An added bonus was a gar-a long fish rarely seen in the waters and a clear image, The captain/videograher thought i had golden do das and had luck where ever i seemed to go, I have arranged to go back for a week in the winter to get the manatees in clear water, Its been an almost life changing experience, firstly to realise a dream and to shoot underwater, The EWA Marine bag worked a treat after using 6LB of lead to help it sink, The images have not been effected by it and they are nice and sharp-well most, two dives and 700 images taken its been amazing and well worth the effort,Anybody who has seen the UKNP or Naturescape forums will have seen one of the images but here are a couple more, I have only my uncalibrated laptop here so will have to process them properly when i get home, i am now at St Petersburg near Tampa and have just my first recce at the famous Fort De Soto, An early start tomorrow will see me there for Laughing Gull,Skimmer and Osprey, More to come next blog-keep tuned 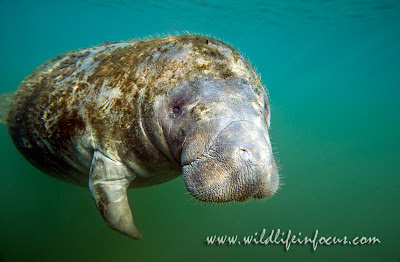 Here is the videographer shooting me shoot her 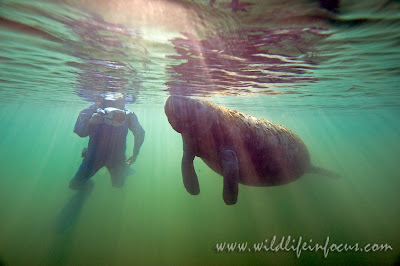 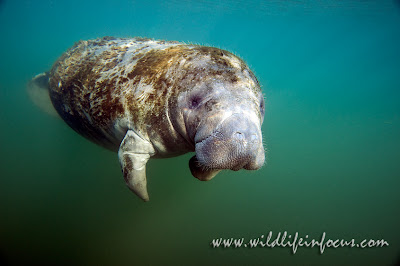