It is quite unusual to see a crow on the ground in the garden.  They come in from time to time for food in the winter but rarely in the spring.  It was when I noticed the commotion by the Wood Pigeons that my eye was drawn to a little grey furry blob by the pond that the Crow was trying to eat.
Sad to say it was an unfledged Wood Pigeon that the Crow had obviously robbed from a nearby nest.
It was not able to eat it while the Pigeons were mobbing it, and it was still there when it got dark, but was gone by the morning, unsurprisingly.
We haven't seen any fledglings this year yet, although I will be expecting Blackbirds any day now as there are three nests in the garden - two at the back and one at the front.
Checking the Wood pigeon nest at the front, she was still sat on it so I guess the dead Pigeon was from elsewhere. 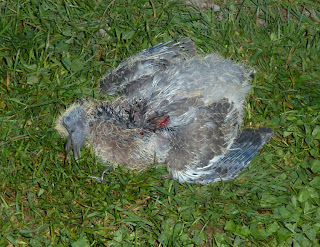 Taken with the P & S Panasonic with flash.

Email ThisBlogThis!Share to TwitterShare to FacebookShare to Pinterest
Labels: garden