For the last few weeks i have noticed that my bird feeders are emptying very quickly and even if i fill them in the evening they are nearly empty the next morning, A couple of weeks ago i slept with the windows open as it was a nice cool night and was awoken at 3am by a ting.ting.ting noise coming from the garden, I looked out of the window and could see a silhouetted shape of a raccoon, I have watched it regularly since then and its been coming earlier and earlier, So last night i set up my D3s (quiet mode) with the 200-400 on a tripod and had a SB 600 flashgun on each side of the bird feeder, I wanted a black background so did not put any flashguns behind-a simple set up, I wanted to take a test shot so used my mini schnauzer which is a similar colour and adjusted the guns as needed, I did not want to burn out any light areas on the raccoon, I did not have a hide set up so i thought i would use my wireless remote, I set the camera up visualising the raccoon and feeder and hoped it would be about right, And then it was just a matter of waiting, The first signs were at 8.20pm when it came into the garden and checked the areas where i put food out for the fox and then went and started to eat some corn i had put out for the deer that were there earlier, Suddenly the raccoon shot up the nearest tree and after a minute a  deer came into view, A couple of minutes later the raccoon descended from the tree and went and fed with the deer, I was amazed, They fed on the corn inched from each other without a problem, I cursed putting the corn out and thought that maybe that would be that, It was gone 11pm when 2 raccoons came back into the garden, One of them climbed the fence and started to feed from the bird feeder whilst the other stayed underneath and fed on anything that fell from the one above, I waited a couple of minutes and then pressed the shutter and with a blinding light-nothing, The raccoons carried on like nothing had happened, I carried on shooting for the next 30 minutes until they left, i quickly went and grabbed the camera etc and bought them indoors and quickly checked the screen, I had not left enough space on the left but apart from that all was good, The exposures were a little dark but not too bad and easily lightened in processing-not bad for the first try and now i can refine things
Every photographer should have an Alfie-better than a grey card 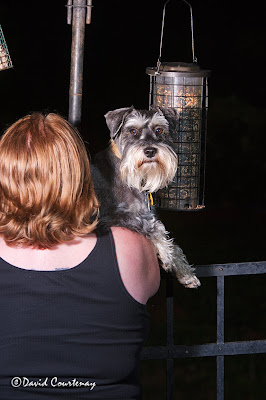 Best shot from the first night 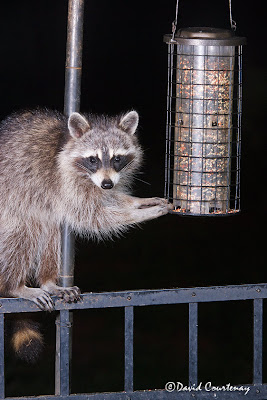 100% crop showing that the DOF was good, I set the camera to manual mode 1/125@F11, I used a Nikon SU800 to control the flashguns and a Hahnel remote release to activate the shutter-from indoors 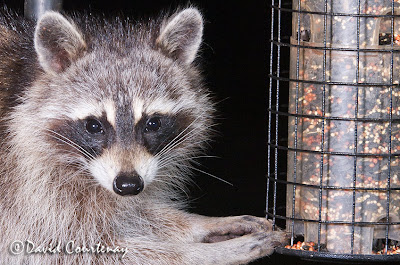 Email ThisBlogThis!Share to TwitterShare to FacebookShare to Pinterest
Labels: D3s.raccoon.sb600.