Sometimes you think the photographic gods are against you, My last few hide sessions have not yielded anything decent, Florida was great but photographically not as good as i had hoped, The snow has now all gone, Yesterday and today its been warm and last night i watched as a fox feed in my garden at 6pm and then returned two more times before 7pm, So today i charged my batteries and got everything ready for another session after my nemesis-The Grey Fox, I had only been in the hide 5 minutes when the heavens opened and then as the rain subsided the mist rose out of the ground-Great that's all i need, Then a slight breeze and it was gone, then back and then gone and then the rain came and didn't go and it absolutely pissed down for over 2 hours, There was nothing else to do but sit it out and hope, 8pm and a Raccoon appears, Well it will do for me, But then the stupid part of my brain took over and i took a shot before it had time to feed, I checked the screen and noticed that not all the flashguns had gone off, I had moved the tripod back a couple of inches when the rain got really bad and the flashgun in the back was not in line of sight, I looked up and the raccoon was gone, I smacked my forehead and called myself some names, I moved the tripod forward and took another test shot-great all back to working, A few seconds later the raccoon started to come down the tree, i thought it had gone back into the woods but no it had gone up, It came down head first and stopped and looked around, it looked like the worlds largest squirrel, when it reached the base it decided to grab another mouthful, I had a second chance and waited, after a minute or so it looked around and i took another shot, In the bag and it looked OK on the screen, i sat back and watched and a minute later it got fed up of the heavy rain and went and didn't come back, I waited another 30mins and  nothing expect the heavy rain was somehow getting heavier and i was now getting dripped upon and decided to make a run for it, End of session, Could have been better but also could have been a lot worse
I used the D7000 with the 200-400, Its a great combo, The D7000 in quiet mode is very very quite and the 200-400 is very versatile, 3 flashguns on mini tripods covered with a small freezer bag to keep them dry 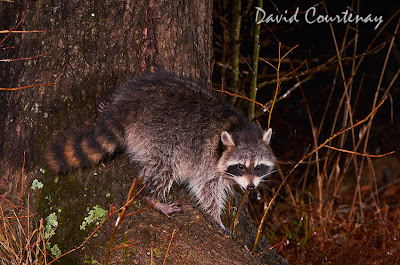 I come in doors and grab some dinner and a beer then check to see if the rain has stopped, It has and there at the base of the tree is a the fox-Grrrrrrrr
Dave
Posted by WPATW at 02:22

Email ThisBlogThis!Share to TwitterShare to FacebookShare to Pinterest
Labels: raccoon.d7000.flashguns.rain