Not much of a Birder!! - Slimbridge day trip Part 1

I went down to WWT Slimbridge last weekend to catch up with the winter birds that come in each year.  It was wonderful to see so many Whooper and Bewick Swans, as well as the White Fronted Geese and hundreds of other waterfowl birds.
As a Twitter user, @martind01, I follow the guys at Slimbridge'  @slimbridge_wild  frequent tweets with interest.  It seems Lesser Scaup, a couple of (Greater) Scaup and a Smew have been seen quite regularly, so I though maybe I might be lucky to see some of these.
So I arrived nice and early and got myself across to the Rushy Hide and watched the comings and goings of the various species, and rattled off a few shots.  The Lesser Scaup was there, across the other side of the water, with its head tucked in tight.
I got a bit bored there after a while and headed across to the other side of site to have fantastic views, in beautiful light, of a Buzzard sat on a post.  I got a lot of shots with both 7D and 5D2, which I will share on a follow up blog.  I  then had the pleasure of a male Sparrowhawk join me on the inside of the Kingfisher hide.  If you know that hide, it has an opening in the roof in the centre with some large glass panes on the eastern side so you can watch the small birds on the feeders at close quarters.  Well the Sparrowhawk obviously decided it would use the hole in the roof to sneak through and catch the little birds out.  I watched in horror as the Hawk flew into the glass, I think it saw it before impact as it slowed somewhat and spread its wings.  It was a bit cross I guess as it tried to keep going at the little birds.  I quickly walked across and stewarded it towards the opening, which it flew through seemingly unharmed, but a close encounter that got me within three feet of the bird to try to help it away from harm.
After a while, I worked my way back to Rushy to find the Lesser Scaup sat just in front of me on the  water, again head down trying to sleep. 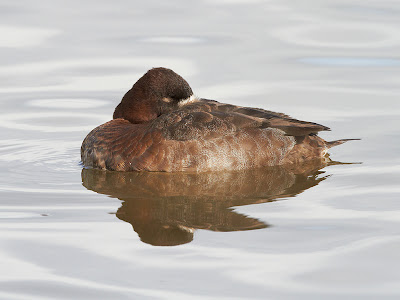 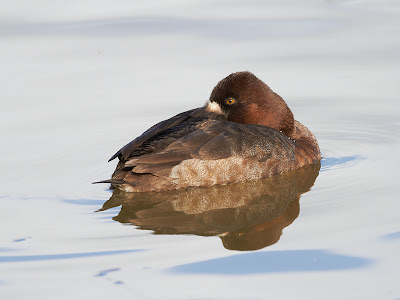 A brief open of the eye 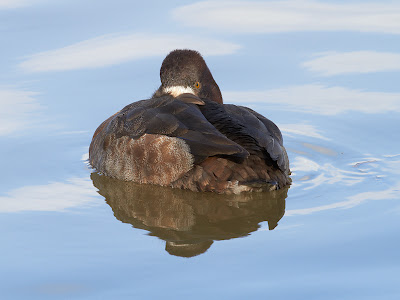 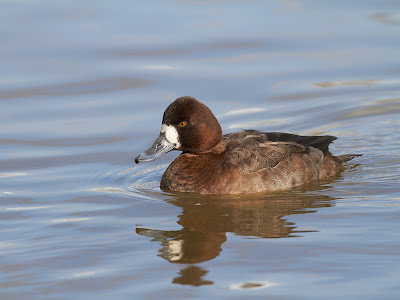 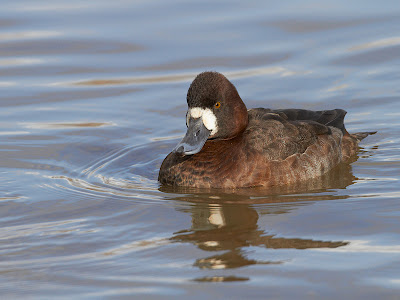 Lesser Scaup (Aythya affinis)  1st Winter Female
Just another boring brown duck? Well yes really.  It didn't do much, it sat about a bit, slept, raised its head a few times.  So given the bird is native North American and shouldn't be over this side of the water and therefore classified as a reasonably rare 'tick', and a lifetime one for me, I have to say it didn't do much for me. Hence the title of the blogpost today
I guess I am not a 'proper' birder in that case and more content to watch more exciting birds like the beautiful Pintail that are really very common at Slimbridge.
Yes it was nice to photograph, and occasionally have some great light, which makes a pleasant change.
Back next time with more exciting birds like the Buzzard and Whooper Swans from Slimbridge for you
Martin
Posted by WPATW at 01:00