Yesterday Pete and myself left Tokyo and headed for Hokkaido, At the airport we were informed that due to snowy conditions we may not land where we wanted-i.e Kushiro but may be diverted to another airport 3 hours drive away or even worse we may end up coming back, Luckily we managed to land safely in Kushiro, Grab the car and head for our accommodation, By the time we arrived it was too late to go out so a couple of beers and hit the sack as we would be up at 4 am the next day,
Today we packed the car and cleaned the snow off of the windscreen and headed for a well know bridge where the Japanese Cranes roost, On the way we viewed some fox near the roadside that looked really beautiful in their winter coats, We did see a few cranes in fields and small streams and after an age finding the bridge we arrived and found a place to put our tripods in between a hoard of Japanese photographers, Conditions were nor great light wise but it was good to see them in a natural environment, We had a fly by from a White tailed eagle, We also saw a whopper swan and a few nice duck species, After we left the bridge site we went to one of the 3 main areas where seed is scattered in fields for the cranes to feed on, The cranes were down to the last 20 birds until the Japanese stepped in and started a conservation programme, Today there are over 600 of the tall beautiful birds, A real pleasure to watch as they fly in and dance for their partners, The young ones were having a ball tossing leaves and snow in the air,We had steady snow most of the day and the conditions were perfect-overcast but bright, I ended the day with around 1000 images after getting rid of the rubbish, Back tomorrow for more cranes although we will also go to one of the other feeding sites were there is a good chance of fox,deer and white tailed eagles as well as the cranes 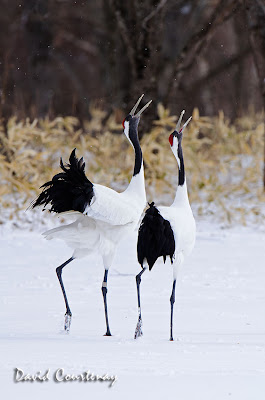 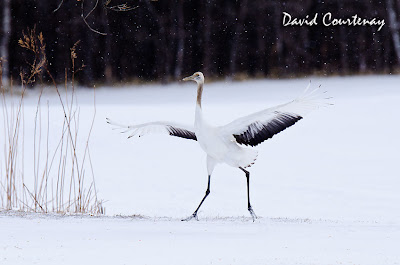 The above images taken with the Nikon D7000 which was faultless all day, Taking nearly 24 gigs of images in very cold conditions