Regular readers and those of you who explore this site will be familiar with the link to Chris Jones blog here.  Chris is what I call a proper birder and you will see this come through in his site and this post.

Chris recently did a nice series on a trip to Morocco so I asked him if he would like to do a guest slot for us.
Happily he agreed and I am pleased to bring this to you.  Over to you Chris.


By way of introduction, I'm a "weekend in, weekend out" birder who has managed to convince his partner that holidays are not all about beaches but can provide an opportunity to increase the birding calendar and put to the test some of the dialogue you can find in many of the overseas birding guides.  So it was by this logic that in March this year we found ourselves, for the second time, boarding a flight to Agadir, bags packed with birding and camera gear and an itinery that would take us from a back street in Agadir to a couple of nights in the Northern Sahara situated on the site on an old Foreign legion fort.
When you arrive in Morocco from a cold winter England, things hit you.  Firstly the Swallows are in full muster and darting around like it's mid summer in the UK, Swifts are also about but not in great numbers.  Gulls are everywhere, mainly Lesser Black Backed and Yellow Legged.  Whether you are in your hotel or walking out you will hear loud melodious calls, your thoughts will go to exotic species, but you will soon discover that they are Bulbuls and they can be seen in the streets taking cover in the road side trees.  Finally you will look at the Sparrows and notice all is not as it seems because occasionally they will turn out to be House Buntings.  You are in North Africa. 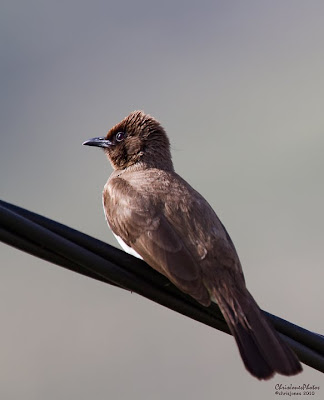 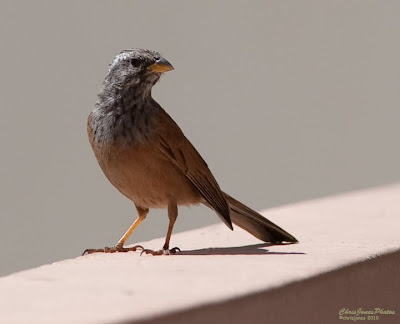 House Bunting
The City of Agadir is a great base for the birder, it's far enough south to make the difference in the species from those you would easily find in the southern Mediterranean to those that only very rarely, or never reach European shores.  In the local vicinity you have the Massa (a prime, renowned birding area and one of the last outpost of the Bald Ibis)  Then inland, there are the paths and road of the foothills of the High Atlas Mountains and Paradise Valley.  It's well serviced by air and with your hire car you can bomb off further south and really take in some new stuff. 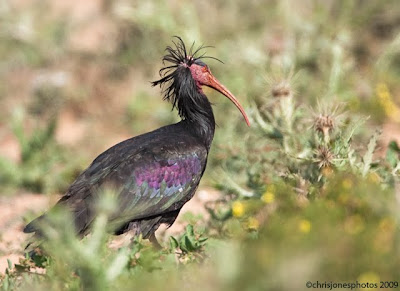 Bald Ibis
For the first day, we head to the Massa, waters are high this year and normally arid areas are wet at best and in a lot of cases under water.  There are Flamingos, Black Winged Stilts and Egrets as far inland as Arhbalou.  It is whilst taking in these sights we see Plain Martin amongst some Swallows over the water.  We head further on towards the coast. Northern Wheatear and Black Eared Wheatear are frequent along with numerous Larks, Warblers and Roussiers Redstarts.  On the coast at Sidi Ousassai, five or six Kestrels are pairing up and sorting out the accommodation in which to nest.  It is not far from here that last year we were shown four Bald Ibis feeding on an area of ground that was laying fallow.  Stone Curlew also breed in the area. 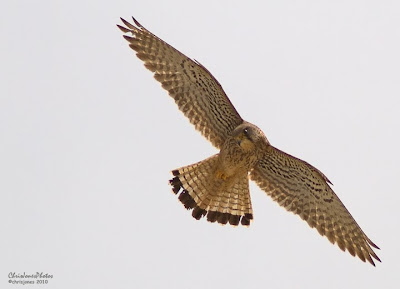 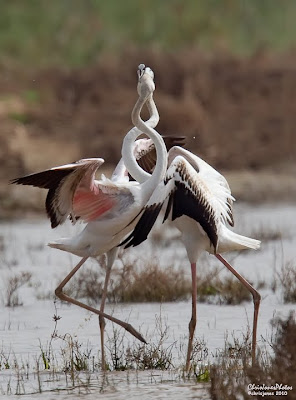 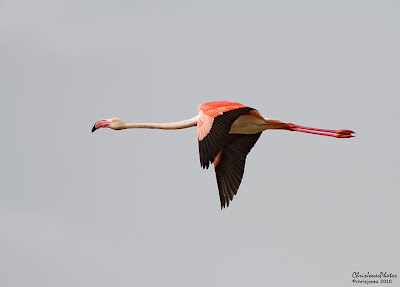 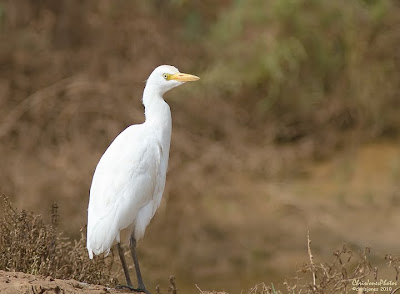 Cattle Egret
The next three days of our trip (sorry holiday!) were to be given up to travelling south down through Tiznit and Guelmim to the northern extremities of the Sahara.  En route there was little in the way of birds but on the outskirts of Guelmim we had read about a good site to see Scrub Warbler.  So after over five hours on the road we pulled over.  Now I must warn you at this stage, that me and target birds do not go down well. in fact, I would go so far as to say that it  should be called the "Chris going to dip list".  Anyway suffice to say, no Scrub Warbler, but as a reward we did see Tristram's Warbler and Trumpeter Finch, so all was well with the world.
We then headed west, at first on pretty good roads and finally on a desert track to the hotel Fort Bou Jerif, picking up Marbled Duck, numerous Montague's Harriers, Honey Buzzard and White Crowned Wheatear en route.  We arrived early evening and were quickly shown our room, politely we enquired "was the bar open"......phew it was!  Over our evening meal of camel we enquired about hiring a driver with a more suitable vehicle to take us out the next day over the surrounding  desert.  This was negotiated and arranged in minutes.  The owner here is very "birder friendly" as they say.
So, at a very civilised time in the morning, we headed off with our local man and Land Rover, the only common language being hands and gestures.  It worked a treat!  During the trip, we reached the coast at Plage Blanc to see a lone beach fisherman and came upon Camel trains.  Birds bagged included Red rumped Wheatear, Black eared Wheatear, Short Toed lark, Bar tailed Lark,  Temminck's Lark, Rufous Bush Robin, Booted Eagle and Richard's Pipit.  It was so good to have someone else doing the driving in a suitable vehicle.

The final days of the stay were given over to travelling back to Agadir, visiting the souk, eating out in a very nice sea front restaurant with an Italian cook, sorting through photos and worrying, unnecessarily, about the state we got the hire car into.  Oh and one last trip inland to Imouzzer via Tamri.  On the mountain road we found Grey and Woodchat Shrike along with Melodious Warbler feeding in the valley. 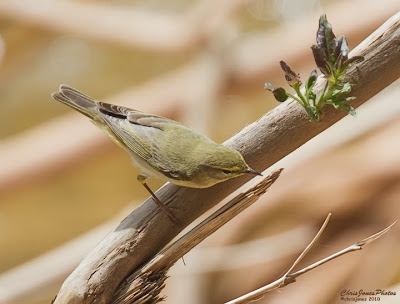 Melodious Warbler
For those interested, here are few of the domestics.

Travel arrangements; we took a Thompson flight out of Gatwick to Agadir, booked it late in 2009 to get the best deal.  With respect to the car hire, again we booked in advance but paid when we got there, finding on the internet we used the "sixth" and picked it up at the airport without any problem, though they do take rather a large reservation on your credit card.
Driving is not a major issue; vehicles in the towns will go anywhere they choose and motorbikes will come at you on the wrong side of the road, but everything tends to happen slower in the UK, so you can react accordingly.
For hotels, we used the Petit Sued in Agadir, very friendly, clean, great breakfast and very good value.  In the northern Sahara, we use the Fort Bou Jerif, a little more expednsive, but check out the link for their website.  They live up to everything they say and more.
That's about it really.  Change your money out there and only Sterling cash is accepted in most banks, though cash machines are much more available than last year.  Traveller's cheques were not good news.  Take an international driving licence.  We were stopped twice and the IDL did the trick both times.  Pay the man who looks after your car when its parked on the street at night.  Take sweets or pens for the children you will meet everywhere and buy a packet of cigarettes for the kind men who talk to you while you are scoping or taking photos.  For most part they mean well.
For reference, I would recommend two of  the Dave Gosney Guides, "Finding Birds in Morocco - The Deserts" & "Finding Birds in Southern Morocco" and "The Birdwatchers Guide to Morocco" by Patrick & Fedora Bergier.

Well what a great post for us. Many thanks Chris.  Great images and story and very useful planning information too.