I have continued to shoot the opossums most nights although things have slowed down some what, I have made a few changes to the set up, I have moved my hide a small amount and also turned it around so that the door face the set up, That was i can shoot through the window or get low and shoot through an opening in the door,The main thing i have done is to plant some spring flowers to try and give the images some colour and make them more commercial, I did get some shots after i planted them but they were not out in bloom but at least the opossums didn't mine them being there, They are now fully out so its time to put some hours in before the deer find them, I put a small amount of food out the other night and during the evening i watched 2 opossums and a fox eat and sit in and around the area so although i was in the living room looking after my dog who had just had the snip it is encouraging. 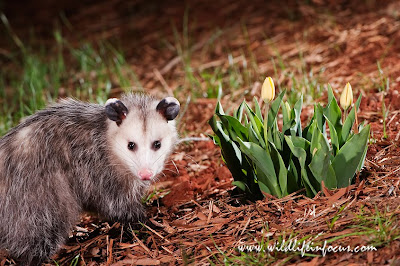 Email ThisBlogThis!Share to TwitterShare to FacebookShare to Pinterest
Labels: opossum.fox.flowers.