This post follows on with a little more detail about the points I was raising about the number of megapixels and crop factors in this post, and prompted from a comment left by Julian on the same post.
Now I started taking pictures of this bird with my 1Dmk111, as it was already set up with the 500f4 and 1.4EFTC.
The first image below shows the full frame version of the image, just basically RAW converted with no photoshop work, including sharpening., just resized to 800 pix. 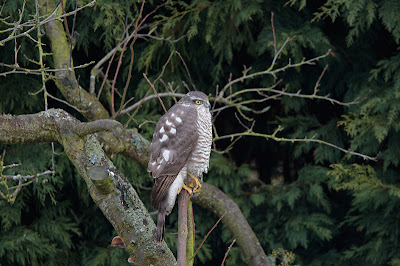 The second image is the with the same lens but with the 7D body that I changed over while the Sparrowhawk was looking elsewhere. 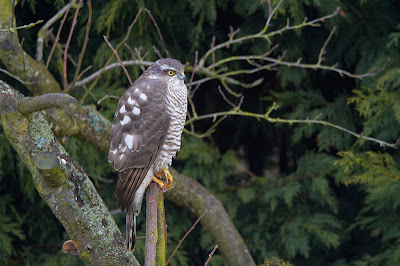 Now to put this in context, the end of the garden is about 27 metres from where I was shooting.  The female Sparrrowhawk is quite a large bird, up to 41cm for a female, compared to 46cm for a male Buzzard.
So if we crop the image to a useful size and format for  rough compositional purposes, we end up with this.  Again, only RAW converted in this case. 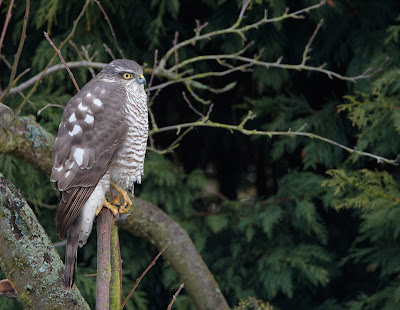 So what does this all mean.
Well for the 1Dmk111, this crop would leave 2572 x 1992 pixels, just 5.12MP.  If I sized at 240dpi for printing purposes, it would mean I could get a 27.22 x 21.08 cm print, or about 10" x 8" in old money.
For the 7D the equivalent size, bearing in mind with the 1.6 v 1.3 crop factor, we are left with a whopping 4260 x 3306 pixels or 14.08MP.  This would give us a print of 45.09 x 34.99 cm or almost 18 " x 14".
This is a huge difference and can mean the difference between getting a useful print or not.
Now if all you want to do is put your images on the web or make 'small - ish' prints, then that is fine, but if like me, you like to churn out A3 + prints then this gives you some real firepower.
Now of course the 1Dmk111 has now been superseded by the 1DmkIV.  But doing the maths roughly, it would mean that you would end up with an image of 3239 x 2508pixels or 8.12MP and a print size of 13.5" x 10.5", so still substantially less by virtue of the cropping factor and the lower numbers of MP.
Now I have previously stated many times that MP's are not everything.....and of course they are not the be all and end all, as it is the quality of those MP's that are important, when it comes to light gathering and noise.
But, for bird photographers in particular, where your subject is nearly always further away than the focal length of the lens that you happen to have, then hopefully what I have shown here is how the body can help you.
Now I know for the overwhelming majority of our astute readers, I have probably banging on about the bleedin' obvious, but it is not until you start to see it on a real life example, and what it means in terms of printing power, then I believe it does help.
Martin

PS, while checking the bird sizes, I also realised that this is still a juvenile female bird
Posted by WPATW at 07:00