You may remember that i shot some opossums last month using the flash back lighting technique, It struck me that it would look good if i had added a moon image to it making a composite, The problem was i had just missed a full moon and would have to wait a month for the next one-well the month has passed and the full moon is about now so 2 nights ago after spending a cold few hours trying the opossums i grabbed the 600 and added a 1.7x extender and armed with the D300 gave me the longest focal length i could have, I set the tripod up and used a remote release, I had the camera set to 1/125 @ F8 and took a test shot, The histogram showed that the exposure was spot on and i tried using Live view and Manual focus, the moon was high in the sky making LV difficult to use so i relied on my eyes and manual focus, the shots came out ok as you can see here so now its just a matter of adding it to the opossum image, I will post that later this week, One of my wifes work collegues has a Raccoons nest in a tree in his backyard so i hope to start shooting them this week as well-more to come 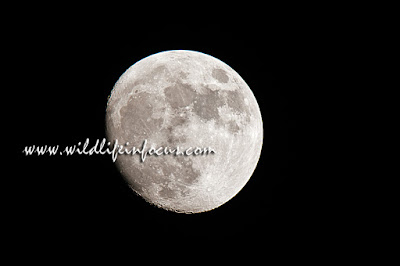 Email ThisBlogThis!Share to TwitterShare to FacebookShare to Pinterest
Labels: moon.raccoon