A picture paints a thousand words

Or so the record goes but its true that one picture can conveys so much whether its emotion,a lifestyle or the struggle for life, A year after being in Japan and i still haven't processed all the images, Yesterday i did some more of the eagle shots and a couple came to mind and took me back to the days we were there, The small fishing village where we stayed was called Ruasu which is pronounced Rowsh, A typical fishing village in the fact that its not very scenic, Drab is the word that comes to mind, You wouldn't go there unless you had to type of place, The weather was being unkind to us, When we were on the ice breaking boats it was cold and wet with some snow thrown in, The sea was frozen solid all the time we were on the boat but being an ice flow it would drift, So early morning when we are on the boat it was 3-4 feet thick and even the boat could not get through and in the afternoon it could be 3 miles out and then be back the next morning, How anything survives there is beyond me and yet there is plenty of wildlife, Deer, Fox, Eagles and ducks were fairly plentiful, If would walked out along the harbor wall there would always be a minimum of 30 white tailed and steller's eagles
A couple of images that i thought summed the place up were these

A young white tailed eagle sits on top of the ice flow, High points where the ice had crashed into each other were favorite perches, You could see the eagles miles out sitting on these, Nothing else around and no hope of a meal except from the boats with photographers on 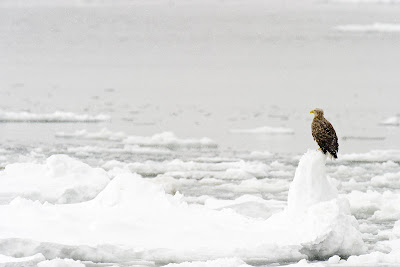 That was the only day we had there where the boat could get out about 1/2 mile from the harbour due to the ice, One day we didnt make it out of the harbour and our trip was all of 600 meters and then a dead stop, Its the first time that i have seen a completely frozen sea, We had harbour walls all around so photographically it wasnt great but as i said there were a lot of eagles in and around the harbour and after a few fish were thrown over board there were well over 50 so a tremendous sight

Here is one of the few decent images from that morning, A mature white tailed eagle glided past the boat on the look out for a freeby, A privilege to be so close to some of natures most magnificent birds 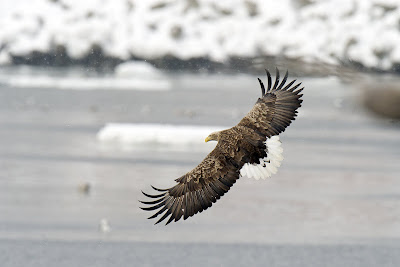 The main reason for me to go back to Hokkaido is to go back to Rausu,It was the one place that we really struggled to get the eagle shots that we wanted, I know Pete is back in Hokkaido now so fingers crossed for you my friend