The weather for this week looks slightly iffy with rain coming and going most days so Sunday night i set up in the hope for Fox, Opossum or Raccoon, Again i use 3 SB600 flashguns, 2 were placed in front of the camera and both to the right, 1 was placed higher than the other and then i had one at the back on the right to give some light in the background and give some depth to the image, The normal scenario is that the deer arrive around 6.30 and then the fox comes in around 6.45, If they are together the young deer tend to try to spook the fox by fake charging, sniffing or just being a pita, It was one of those nights where nothing was around by 7pm and it was deadly still, You think to yourself that its not going to happen, 7.30 comes and goes and nothing, I had seen a dog wandering in the woods during the day and guessed that the deer had fled, It was around 7.45 that i caught sight of an opossum at the far end of the garden but it crossed and kept going, Around 8pm and there was a rustle in the woods next to my house and a minute later a fox enters at the far end, Goes to each tree where i have put a few grains of food and steadily makes its way towards THE tree that i am focused on, I have 2 spot lights illuminating the garden and they give enough light to use AF so that i can recompose etc if i want to, I am using the D3s and 200-400 along with a 1.4x as i now do not have the pulling power of the D7000, I have the camera set to Q or quiet mode but the Q mode on the D3s is at least twice as loud as the D7000 and i wonder how the animals will react, I have also added diffusers to the front flashguns as the images posted before on forums had comments that the flash was a bit harsh, It was fair comment and i have diffusers by lumiquest that work pretty good, The fox came to the bait and i watched for a couple of minutes before making a tiny sound with my lips, the fox looked directly at the camera and bang, 1 image in the bag but the fox legged it back into the woodland, The noise of the camera i guess as it never did that with the D7000, A few minutes later it came back but now fed very nervously and soon ran off not returning, I didn't even try to take a shot the second time, I waited around hoping it would return and then the opossum came back into the garden and up to the bait, It didn't react to the first shot and a few minuted later i took a second and it to went and a few minutes later i called it a night, It was getting cold anyways and i do not like to stress the animals too much as i want them to be relaxed in the garden, Soon they will realize that the flash is harmless and stay, I did leave the flashguns in place and left them out there for a couple of hours incase the animals came back, It just a matter of them getting used to the flashguns being about,
You can see that the fox is dark on the left side so i will now have a flashgun on the left pointing back at the fox to light the side and give a rim effect, It all a matter of experimenting and i find it good fun as well 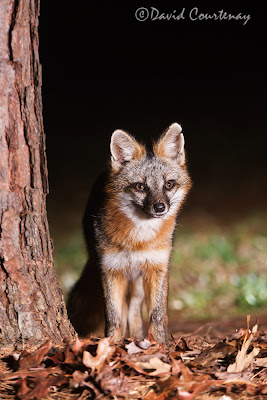 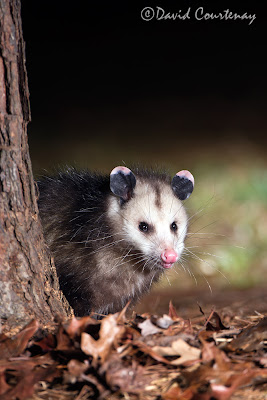 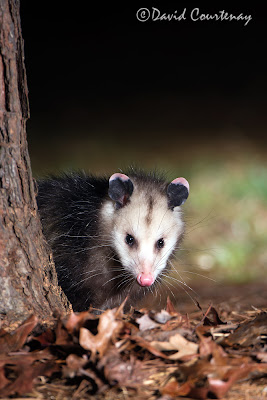 Email ThisBlogThis!Share to TwitterShare to FacebookShare to Pinterest
Labels: sb600.flash.garden.fox.opossum