Its about a year ago that i went to Japan and on the 2nd day there we went to the CP+ trade show to have a look at all the new goodies that the people who take all our money are going to produce, On that note Canon showed their 200-400 prototype-So that's a year Canon and still no signs of it hitting the shops, Just incase you think its some kind of Japanese mythology here a shot i took of it 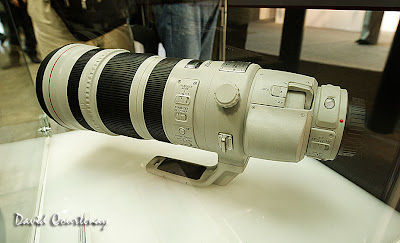 Anyway talking of Japan and its wonderful winter wildlife i recently received a mail from a blog reader in Sweden called Jens and it seems that he is going to Hokkaido after reading the blog and getting inspiration from it-kinda makes it all worthwhile, The CP+ show this year will be a big event for Nikon as it seems that the new D800 will be announced,The rumours or leaks have been coming thick and fast for weeks now so it seems that the 36mp 4fps body will soon be around and i must say that it looks very interesting especially as recent leaks state that with the battery grip it will do 6fps which is the same as the D7000 and in DX crop mode gives the same 16mp as the D7000 so basically 2 cameras in one, I will look at this with interest and if all is well i may pull the plug on one towards the end of the year although by that time the D400 should have risen from the flames so who knows, What i do know is that Nikon have had 2 major disasters in the last 12 months and yet have somehow come through it all and are offering superb new cameras whereas Canon seem to show what may happen at sometime in the future-hats off to Nikon
Here are a couple of snaps from the CP+ show which although quite a small show was nicely laid out and had plenty of interesting accessories that i had never seen before 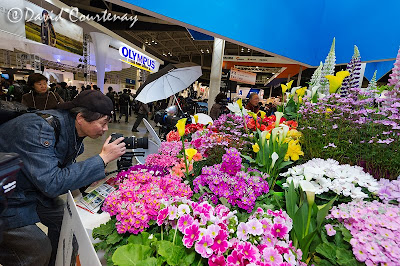