As promised, a week after I went to WWT London, here are a couple of images tat were taken about midday, in horrible flat grey light.

I arrived at the centre at about 11 am, having dropped Jac off en route for her visit to London.  As I walked in from the car park, I heard an unusual call which made me immediately think 'Parrot'., but I didn't see anything at this stage.

As I walked down the first part of the reserve, I heard the sound again and looked up to see the distinctive shape of a couple of Ring Necked Parakeets.  Now these birds are quite abundant in this part of London, with many thousands that have now taken hold.  I did see some back in about 1997 when I worked in south west London, but have not seen any since that time, and certainly not while I have been taken photos of birds.

As I walked down to the bottom of the reserve towards the observation tower, I could see a number of them on the roof or just under the eaves.

Somebody in the tower told me that they were stripping out the house martin nesting material, which it certainly looked like.

These two images were taken with the 7D, 500f4 and the 1.4 EFTC for maximum reach, and even then are quite heavily cropped.

Pretty birds and noisy birds they certainly are, but quite a lot of character when watching the behaviours. 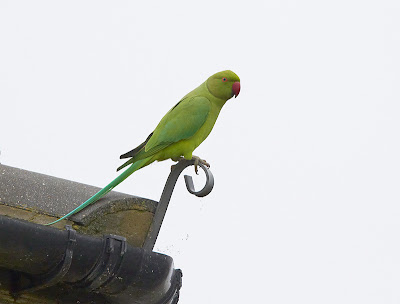 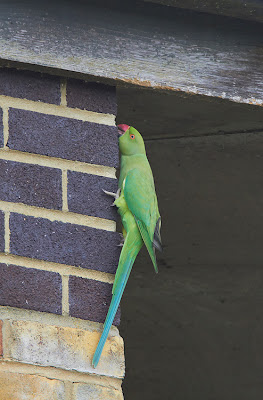 While up in the tower, I could have down with much shorter reach of lens as they flew by very close to as they came in to land.

I will be back with some other birds, and a bit more of a review of the centre in subsequent blogs