Playing around with filters

Now you may want to sit down for this-I have had the cameras out, Sunday afternoon i took the camera gear along with my wife and dog for a trip to the Haw river in Pittsboro, There is a very nice weir there, The sun was high and the light was pretty harsh but what the hell, I set my tripod low and had the Nikon D3s and 24-70F2.8 fitted which is one of my favorite set ups, I took a shot without any filters with the ISO at its base i.e 200 which will give maximum dynamic range-detail in dark shadows and white clouds, I had started with an aperture of F8 which gives pretty good depth of field and got a shutter speed of 1/320 which is quite fast but as i said the light was bright 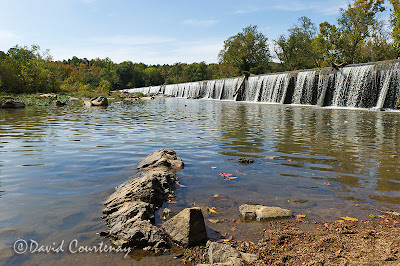 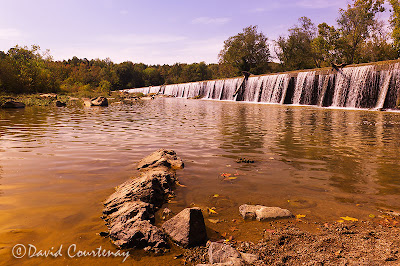 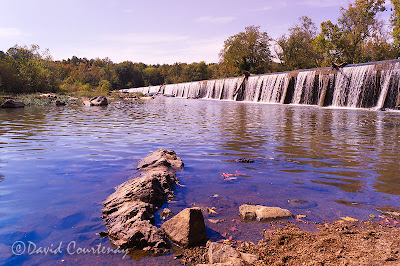 I dont think that they really work in this instance and think that very grey days will be best, I now put on a 2 stop ND on its own 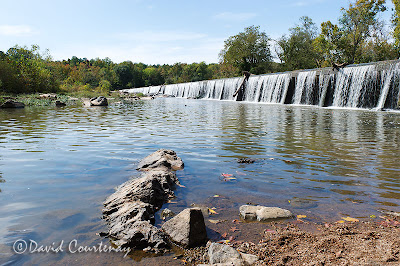 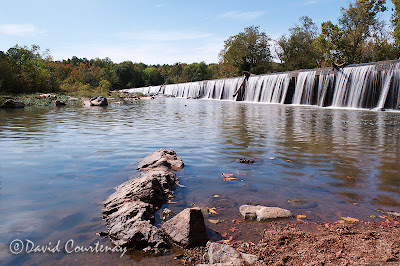 OK so now we are getting somewhere, the water is getting smooth so i add the poloriser to add 2 more stops and take some glare off of the water, I also set the aperture to F16 giving a 2.5 second shutter speed 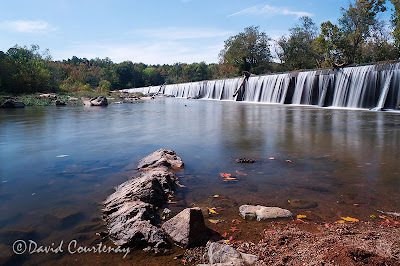 Very nice, Now remove the 2 and 3 stop NDs and replace them with the 10 stop Lee filter, This with the poloriser gives 12 stops and a shutter speed of 76 seconds-yep you read that right so i had to set the camera to Bulb which is the last shutter speed setting when you have the camera in manual, In Bulb you hold the shutter button down and it will stay open until you release it-best use a remote cord for this 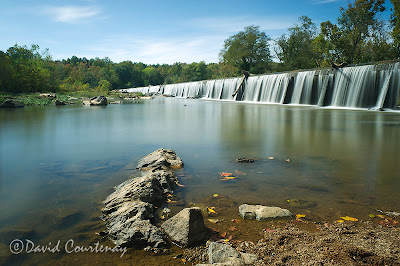 The Lee 10 stop big stopper does give a very blue colour cast, I have removed that but i think it still has a slight green cast to it but for the blog it gives you the idea, The very long shutter speed combined with the poloriser has given a very flat even water and the water flowing over the weir is very milky-nice

After setting up a Mexican family along with baby Rottweiler decided to fish and play in the water right next to us which pissed me off somewhat, The best bit was when the dog shit next to where the were sitting and instead of picking it up they allowed their son to tread in it and then the dog rolled in it, The wife then picked up her fishing rod and whacked the water and then managed to pick whatever it was out with the rod and placing it carefully on a rack beat the hell out of it, I went over and saw a young Northern water snake (harmless) on the rock, It was belly up and looked dead, 10 minutes later i went back and it was still there, I turned it over using a stick and noticed a small movement with its tail and the tint body flattened, I think it was playing dead like a European Grass snake does, A few minutes later i went back and as my shadow passed over it moved with the speed of light, The water snake looks similar to the venamous water moccasin but as the moccasin is a viper it has a totally different eye, The water snake has a round pupil whereas the moccasin is a slit, We packed up and left but i would have really liked to have thrown the women in and beat her with the fishing rod 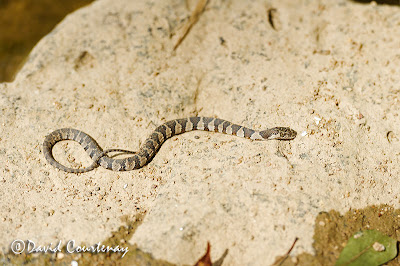