Yesterday i went back to the house as i had left the pond until last, I have to say its been a huge success and its going to be the first thing that i put into my new garden although i probably will not put a frame pond in and try to make a natural looking woodland pond by making a shallow scrape and using a pond liner, I have to say that i didn't realize how much pond life was still in there until i emptied it, Dozens of Tadpoles and dragonfly larvae along with lots of other bugs and skaters, I managed to get most into a nearby pond but am sure that there were a few fatalities, All in all worth the effort and shows that were there is water there is life, When i made the frame for the pond i had to add bits of wood to level the whole set up, I then put the pond liner in and then put soil around the pond to make it look cleaner and more natural, When taking it apart i grabbed the ledge made by the joined planks and gave it a good tug, On one piece i grabbed the ledge and felt my fingers go into a cobweb, I was concerned about Brown Recluse but when i felt the web something else went through my mind, I carefully turned the plank over and yes there was a huge Black widow female about 2 inches from my finger, I carefully put the plank down, She didn't move and i had a good close look at her, She was a stunner, I am not into spiders but Black Widows are a very cool looking spider with their shiny black and red bodies, She was the biggest i have seen and i was very very lucky that i didn't get bitten-now that would have hurt. Being a Brit you tend to forget the dangers of living abroad and sometimes let your guard down, I am sure i will have alot in my new garden as well as some snakes but i will be more cautious, It was a real shame that i didnt have my D7000 and Sigma Macro lens with me as she was very quite and did not move until i left.
Here is a black widow that was nesting on the side of my house a couple of years ago 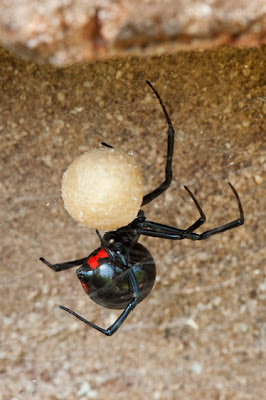