Each evening this week i have been up shooting the Belted Kingfishers at a local lake, During the days when i have some spare time i have been out in my garden shooting some spiders and bugs, There seems to be an abundance of yellow and black (wasp) garden spiders at the moment so i have been trying to shoot these at all sorts of angles, After shooting some yesterday i thought how nive they would look with some dew on the web like you get in the early mornings in Europe, We dont get much dew here so i thought i would make my own, I popped down to my local Walmart and purchased an atomiser or spray mister for the princely sum of 89 cents and this morning i took some straight on shots then gently sprayed a fine mist on to the spider and web, The spider took no notice and i thought that the water droplets gave the image an extra dimension, Either way the agency will have a choice of with and without 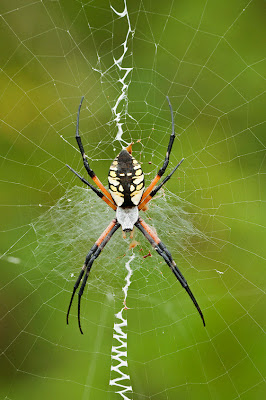 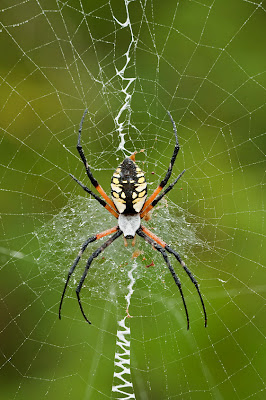 I noticed a spider next to one of the small bushes and noted that there was some of its left overs and a nice leaf caught in the web above it so i carefully set up and took a couple of shots, I checked them on the screen and thought the image would look better if i moved a foot to the left, This small move gives the image a much different cleaner look, I think with a little more work in processing-cleaning up the damaged leaf on the left and toning down the leaf above it will be a nice image and a good lesson in composition 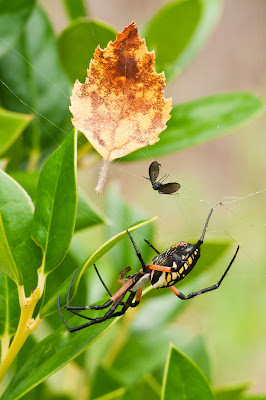 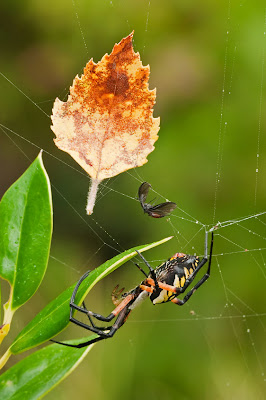