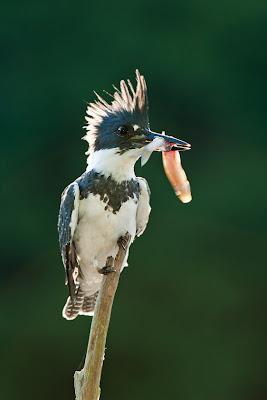 When i ever i am out i take a pair of binoculars with me, I always have my eye out for whats around me-even when i go to the shops i look at the birds nesting in the signs and when i see something of interest i will go back and work out the best way of getting good shots, A couple of weeks ago i was walking my dog around one of the local lakes when i looked over at a small dead tree that was on the opposite side, I could see a white blob on top so i stopped and looked through the 'bins' and noticed a Belted Kingfisher on the top, Firstly i was very excited by this as i had only seen one since moving here a year ago and secondly i was very surprised as this is an incredibly busy place with dog walkers and joggers every minute of the day, I made my way around to where the dead tree was and found a small track through the lakeside trees that fishermen had handily made, The kingfishers instantly saw me and flew off, I kept it in mind and would look at the tree when ever i was there, A couple of days ago after seeing the bird there again i decided that mornings would be best for the light and set up early,3 hrs later and nothing so before leaving i thought it best to be totally hidden and made a hole on the trees and bushes for the lens to poke through, I returned that afternoon and set up, I took a few test shots but now the light was in front of me meaning that the bird would be back lit, I would need fill flash and so put the flashgun and better beamer on and fired off a couple of test shots to make sure that the light hit the perch through the foliage and that the exposure was ok, I was concerned that if i gave too much flash that the whites of the bird would burn out, I was also concerned that the flash would spook the bird and that it would fly off after one shot, I was there about 45 mins when the bird arrived and landed on the perch, Luckily it was facing me, I let it settle and then took a shot, The bird jumped but stayed put, so after checking the screen for exposure and making sure that there were not any highlights blinking i carried on, The bird stayed about 1.5hrs and in that time i managed 187 shots, It also caught 2 fish, I noticed that when i caught a fish i would land back on the perch for a few seconds before going to another branch sticking out of the water to beat its brains in and swallow it before coming back, I will need to have a look and see if its at all possible to get a position on the other branch as its very low to the water and you will get nice a reflection, So an amazingly succesful first session and i will be back tonight for another go, I have some shots that i would like in mind so now i have some shots in the bag maybe time to be abit more adventurous, I used the Nikon D3 body as the light would be low, Now everybody nows what a great camera this is and how good it is at high ISO,Well i started shooting at ISO 400 and soon upped that to 800 but i still like to keep the ISO as low as i can so i dropped the ISO back to 400 and once i had the focus point over the birds eye i would use a remote cable to fire the shot so getting a sharp image at very low shutter speeds for the length of the lens (600+1.4x), The shots here were about 1/60 @ F11 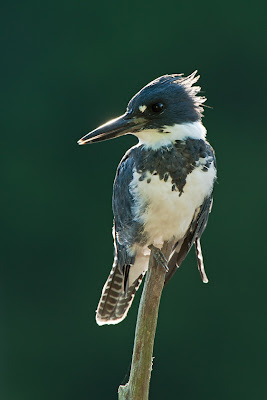