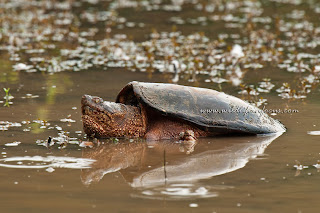 In answer to Martins post yesterday i am in the camp of DIY, I much prefer to do my own thing and find my own subjects whether its near home or abroad, The satisfaction of the DIY approach far exceeds being shown where and how to shoot a subject, You do your own fieldwork and use field craft which is something that you learn along the way-anyways 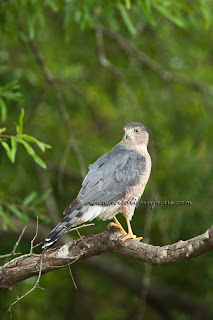 This week has had its ups and downs, I have continued to go to the Kingfisher perch but he seems to want to pose on every other perch around the lake, He is always in sight or hearing range but that's life and in time it will happen-persistence normally pays off, Last night i left the perch and walked towards the car, I stopped and watched the KF from a distance and 5 mins later he caught a fish and landed on the perch i had just left-DOH, The light was gone there anyways and it was good to see him still using it, Whilst waiting i noticed a large turtle half out of the water,He made a sudden dash and was nearly out of the water when he stopped, I didn't know what he was doing until a few minutes later a smaller (female) turtle scooted away from under him-so i got my first reasonable turtle shots in the bag-look close and you will see the smug look on his face
Yesterday morning i noticed a small flock of birds shoot out of the garden and when i looked outside a sharp shinned hawk landed in the tree, I grabbed the D3 and600+1.4x and grabbed a few shots from outside my back door, The light wasn't all that and thank god for image stabilisation, A beautiful bird and difficult to get on camera-bonus
Today i was back in my garden looking for spiders and found 8 webs with spiders on, I shot from every angle and changed various setting to try to get a different shot, One spider had a meal so i shot him eating and afterwards it repaired its web, Black and yellow garden spiders like the European wasp spider have a thick zig zag design in the center and it was this that the spider repaired, First it laid a thick multi strand web and then a single thread-incredible to watch and very difficult to shoot without a proper macro lighting system, You can see the multi thread web in the first image and then in the second spider image the back legs are holding the web whilst the spider lays thread fixing them together-amazing nature at its best
So far the week has been far from unproductive-maybe not what i had set out to get but so what 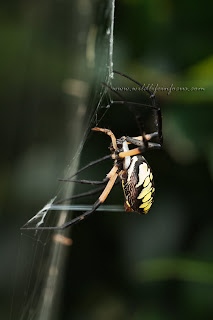 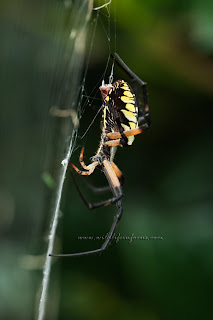