Following on from my last blog, here is the second installment.

As I pulled up at my first stop, I saw four raptors to my left circling up to gain height. As I had only recognised four large 'dots', I assumed they were Buzzard. Getting out of the car and training my binos, the top two birds were Buzzard, but as I scanned down, I was thrilled to see the lower two were Red Kite.

Now I had once see a solitary Red Kite near this location a few years ago so this was a good start. Within a short space of time, I grabbed the images that I shared in the last blog.

Scanning further with the binos, I soon found six Red Kites, and eight Buzzard. One of the Kites spent some time on the ground in a field to my left and then after being disturbed by a Buzzard decided to fly towards me. This sequence shows the results of its catch, and how it feeds while on the wing. 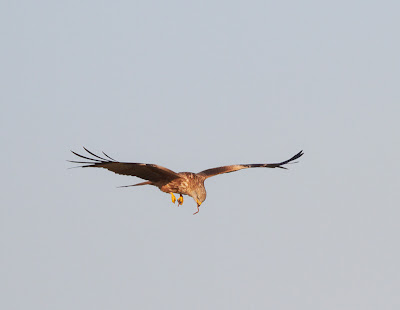 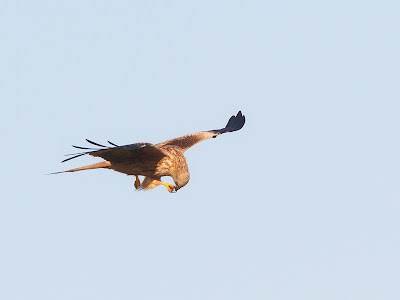 Next morsel goes in 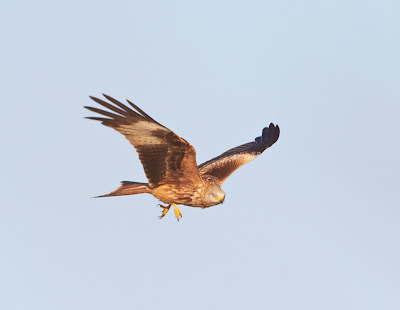 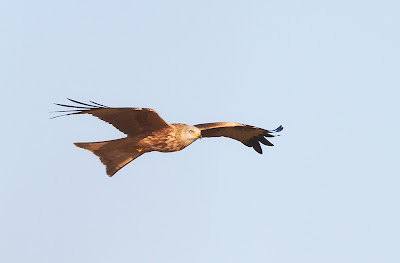 All cleaned up' for flight again 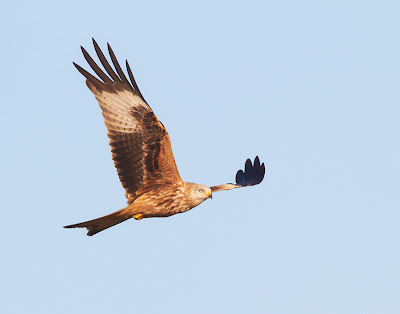 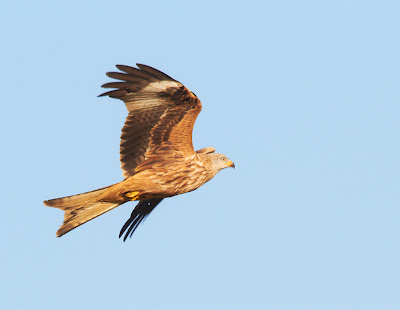 Afternoon sunlight was kind to me
So within the space of a few minutes, I was up to three raptors.

Moving a little further on, I met up with a bird watcher and we shared a few stories. A decent sized flok of Golden Plover were dancing in the light too, showing their wonderful profile and changing tones as the flock wheeled. Sadly, they were too distant to bother with the camera. The first Hare of the day showed itself, and another half dozen Buzzards were around, or maybe they were the same as the earlier ones.

Moving on again, I was fortunate enough to see seven more Hare in one field, three in another and another couple in a third field. A couple of Ravens let me know of their presence with their distinctive calls, while the Buzzard count went to around about twenty and even more pleasing, I would estimate that there were a total of about 25 Red Kite too. Flocks of Yellowhammer and Skylark were also interesting to watch and hear.
But it was shortly after seeing the Yellowhammer, that one of my target species flew into view - a stunning male Hen Harrier. Into the sun from my location, and I watched it for about thirty seconds only, but beautiful nevertheless, a real thrill.

Moving back to the second site, I rejoined the birder and we looked for the male HH but to no avail. We did see two female Hen Harriers hunting the rough cover, one of them spooking up a Short Eared Owl into flight.

Following the direction of flight of the SEO, I found it sat down in the middle of a field, into the light and too distant sadly.

That little tiny blob below is it, and the massive crop just merely allows me to confirm identification. I watched it for about 45 mins but it was quite content to just sit there and outstare me. 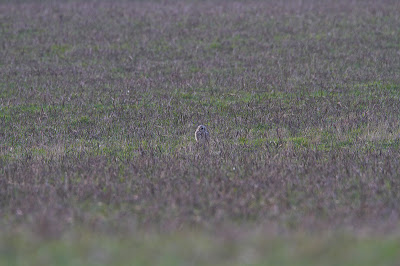 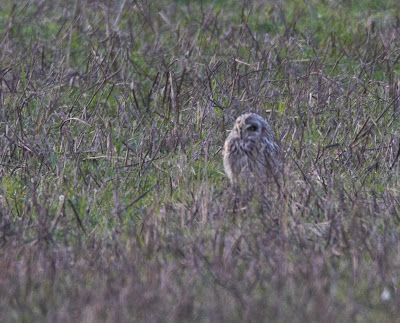 As the light got lower and lower, I moved towards home. A further sighting of a Sparrowhawk on my way back brought my raptor numbers up to six species. My challenge to get some decent SEO shots again remain but for me the birdwatching element of the day was probably the best bit for me.