Its been a bit up and down the last couple of days, I have continued to watch and put a couple of sessions in with the opossum and i have been doing a fair bit of homework on the opossum, Here are some interesting facts that you may find interesting and make it more of an interesting and often overlooked subject
1,Opossum fossils have been found dating back to the dinosaur age, So its a great survivor
2,Its has over 50 teeth, More than any mammal
3,When it feels threatened it foes into a non induced coma that lasts from 40 mins to 4 hours, Thats where the saying 'playing possum' comes from
4,They are immune from snake bites and can eat a rattle snake
5.They dont get Rabies
I set up the other evening using the D7000 and 600 as i wanted big in the frame images, I used a SB900 and SB600 set up but got it slightly wrong as when i took a shot the foreground was a bit dark and the background over light, I kicked myself but there you go, We have to make mistakes to learn i guess and there will be other opportunities,I had a play in PS but its not that good 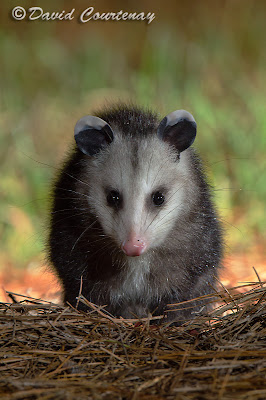 The background is just too bright,
Saturday morning we awoke to a beautiful if not cold frosty morning, I was sitting in bed drinking a coffee when my wife said that there was a deer in the garden, I had not seen a deer here in daylight and soon realized that it was a male (Buck) with a nice rack, It was followed by another similar sized buck, They were in transit and were gone within a minute but what a great sight to see from your bed, I made sure that there was extra corn in the garden incase they come back.
I had a quick play with the New Acratech head and leveling base on my Manfrotto 055Pro tripod with the 600 with and without the 1.4x, We had 2 nuthatches in the garden and i slowly edged out of the back door and managed a few shots before they went, Firstly its no Wimberley but then i knew that, It needs to be set pretty tight to stop a big lens flopping back or forth, No problem there, With the 600 even locked down tight you could easily induce a rocking motion, So good technique is needed, On the plus side its easy to use and very smooth, I dont intend to use it with the 600 and as i said before its really for the 200-400 and smaller which i am sure it will be great, the light was quite low and the shutter speeds were around 1/100 so i was asking alot but i did get some sharp images so cant complain,More later 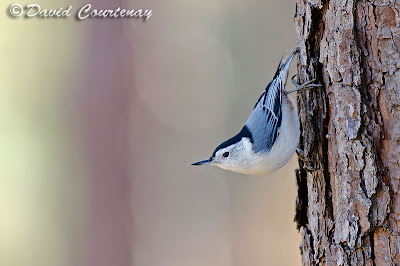