There has certainly been a change in the weather, For the last few days we have had quite a heavy frost in the mornings and glorious sunny days, Tuesday evening i grabbed all my gear and headed off to Falls lake, The colours are at their best and will only be that way for a few days to a week unless we have heavy rain or wind and then it will be all over, The Lake is very low after a long and hot summer and where i shot you would normally be waist deep in water, There were a lot of deer and raccoon prints in the mud, I guess the deer were there for a drink and the raccoon were collecting the mussels that were now exposed, I had about 30 clear minutes before the sun would be too low and cast a heavy shadow across the trees on the far bank, I had lenses from 14mm to 600 as i didn't know really what to expect as i had only driven past before, Its good to have a range and the long lenses can give you detail shots rather than the standard wide scenic type, The wide shots were not that great as the sky was clear of any cloud to give some drama, When i got there the lake was flat and calm but as soon as i set up the breeze arrived and shot with and without the 10 stop filter to flatten the water, As always tripod mounted and cable release 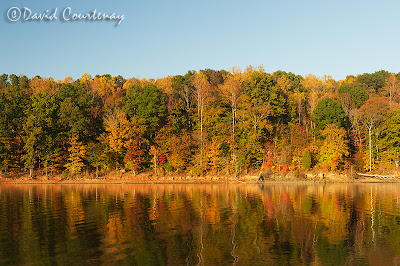 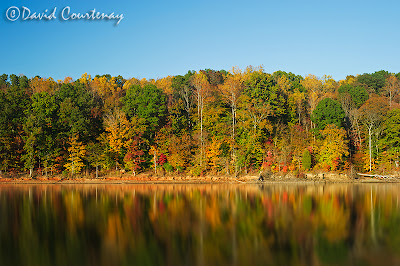 I shot using various lenses until the shadow appeared across the trees, I had a quick walk around and then as i turned towards my car i noticed the back lit trees under the bridge in the distance, I set up with the 600 on the D3s and just managed to get it in, The bridge gave a natural frame so i could see what i was going to get and its probably my favorite shot of the night 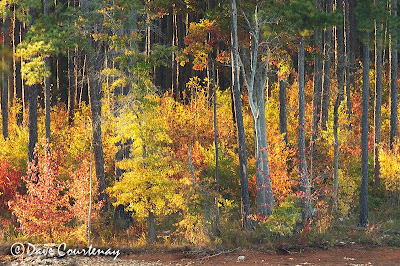 I had noticed that there was mist rising from the lake in the colder conditions so i was up and out before the sun rose and went back to the same place, What a difference, Thick fog so i turned around and went back to the small 3 acre lake that is on the community where i live, The conditions there were perfect and as predicted the mist was rising off of the pond, I set up and too a standard shot 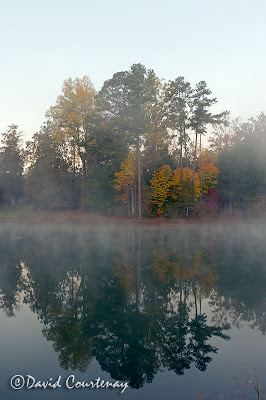 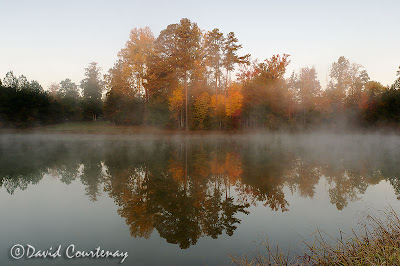 I used a 2 stop grad but think that a 3 stop may have been better as the sky was blue and not the off white here, The sun was rising and the rays were catching the coloured trees on the far bank nicely 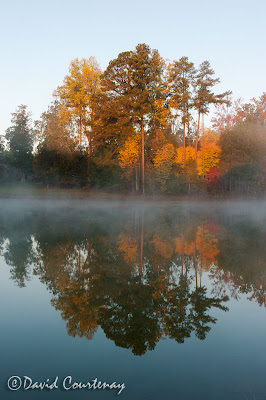 A flock of Canada Geese landed as did a heron which didnt seem to put off by my presence which was good, Every night since moving in i have continued to put out some deer corn and dog food and every night it has been eaten, The dog food mainly by an opossum and there are 2 does with young, I have seen a Grey fox twice but its very skittish no doubt due to the 2 spot lights that i have over the baited area, It will take time but within a few months they will become more relaxed in a lighted area, The opossum has no problems with it and comes and goes all evening, One evening i watched it 5 times, The opossums here are very dark compared to where i lived before so that will make a nice change